Probe on to verify his connection with Paramount Immigration firm 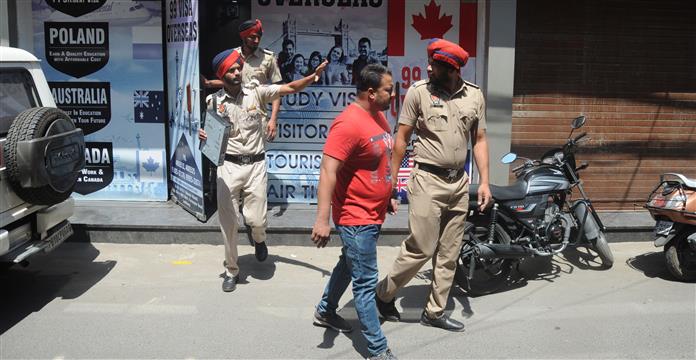 Police officials conduct a raid on the office of travel agent Nitish Ghai at Ghumar Mandi in Ludhiana in 2018. File photo

After the notorious travel agent of Ludhiana, Nitish Ghai, who was booked in over 100 cases of travel fraud by the city police in 2018, came to the limelight again with his recent arrest by the Jalandhar police for duping gullible youths desiring to go abroad, Commissioner of Police (CP), Ludhiana, Kaustubh Sharma has sought details of all cases registered against the agent. He claimed that a reminder letter had also been sent to the Enforcement Directorate (ED) for the attachment of Ghai’s property.

Another reason for police action is due to the huge drama witnessed at the CP’s office on August 5 when Shiv Sena Punjab workers and Ghai’s family came face to face. The Shiv Sena along with victims of the travel fraud cases had been demanding immediate attachment of properties worth crores garnered by Ghai from his illegal travel business.

Talking to The Tribune, the Commissioner of Police said: “When over 100 FIRs were registered against Ghai in 2018 for duping people seeking green pastures in foreign land, the Commissionerate had written to the Enforcement Directorate (ED) for attachment of properties worth crores garnered by the agent. We have now written a reminder letter to the ED so that the property attachment process could be speed up and the step will also serve as a deterrent for other fraudulent agents.”

He said he also talked to the SSP, Ferozepur, Surendra Lamba, who had then as the ADCP in the Police Commissionerate registered over 100 cases against Ghai.

Sharma said now, he asked a JCP-rank officer to ensure justice for the people duped by Ghai and also ensure proper representation of cases at the court so that the agent could be convicted. The official should also take regular updates regarding the attachment of his property.

Meanwhile, the CP cautioned the people to file cases for travel or Immigration’ visa with registered travel agents only and don’t fall prey to agents such as Ghai.

Of 104 cases, compromise reached in 3

The Police Commissioner said as many as 104 cases were registered against Ghai, of which compromise was reached in three cases. Accordingly, the court acquitted him. One case was cancelled and in one case, quashing was filed in high court. “Till date, in 98 cases, challans have already been filed by the city police and the cases are under trial in Ludhiana courts. We will ensure that if compromise is not reached in the cases, Ghai be convicted for the crime he committed. I am now personally supervising all cases,” Sharma said. The FIRs were registered against Ghai, his brother and others who were running offices namely GGI Group, Blessing Consultancy and 99 Visas Overseas in Ghumar Mandi in Ludhiana.

“Recently when the police registered a case against the owner of Paramount Immigration, Fountain Chowk, who duped several people by issuing fake visas, someone complained to me that Ghai is also a partner in Paramount firm and the complainant also sent me a video of Ghai sitting with its owner. Let us probe the complaint, if he is found connected with the firm, the police will take action against Ghai as per law,” Sharma said.