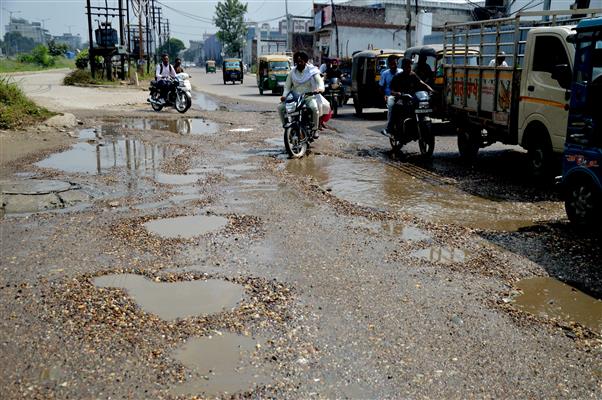 With the government authorities concerned failing to find out any permanent solution, potholes on Giaspura to Sherpur Chowk service lane, Sherpur Chowk area and a portion of the road stretch towards Dholewal side are posing a grave threat to commuters. Another issue of water accumulation on the service lane is yet to be resolved.

Notably, Sherpur Chowk service lane is one of the main entrances to the city on the National Highway 44. On Thursday, the water was still accumulated on some broken portions of the service road just outside SPS Hospital despite there being no rain.

Residents said potholes and water logging issues are being ignored by the departments concerned, leaving the commuters in the lurch. They blamed the National Highway Authority of India (NHAI) and the Municipal Corporation (MC) for putting blame on each other instead of resolving the matter.

According to Municipal Corporation officials, the service lane and Sherpur Chowk area are to be repaired by the NHAI. But, the NHAI had earlier this year written to the MC Ludhiana to take corrective measures to fix the sewerage-related problem as the road repair work was ‘hampered’ due to overflowing sewers. Both issues have not been resolved so far, the residents said.

A city resident, Rajat Sood, said, “I had made multiple complaints to the Union Minister and National Highway Authority of India (NHAI), requesting them to take steps to repair the Sherpur Chowk area roads to avert mishaps. The road repair work was, however, started by the NHAI and some road portions were made of cement concrete near Sherpur Chowk but the work was later stopped.”

“Around four months ago, NHAI had also written to the DC regarding Municipal Corporation’s (MC) overflowing sewage and dumping of effluent by some industries on the service road, causing persistent water logging and damaging the service road. Actually, both NHAI and the MC are putting blame on each other instead of finding out any permanent solution. In short, there is no relief from potholes and overflowing sewage to date,” Sood added.

A road safety activist, Rahul Verma, said the MC had not resolved the issue of overflowing sewage due to which the road repair work got delayed. MC needs to find out the permanent solution to overflowing sewers to avoid any water logging there, he said.

Notably, the matter of a badly broken Sherpur Chowk stretch and service lane was raised during the MC’s General House meeting held earlier this week. MLA from Ludhiana South, Rajinderpal Kaur Chinna said a meeting with NHAI officials would be fixed soon and required steps would be taken to get the broken road portions repaired.

RP Singh, Regional Officer, NHAI, said he would look into the matter and necessary steps would be taken to get the issue resolved.