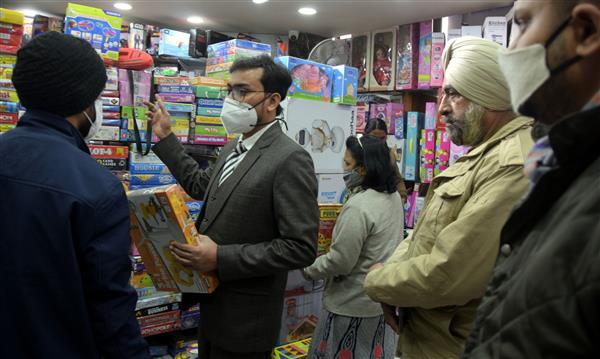 Talking to The Tribune, the official said there are total about 380 products on which the ISI mark is required. Toys are one among these products. “Today, we conducted checks in about half a dozen shops and more or less, the stocks had ISI stamp. But here at Jak and Jill in Ghumar Mandi, a few products were being sold without ISI mark. We have made a list of all these products and have asked the owners to provide us the details of the manufacturers so that action can be taken against them too. In case they fail to produce the desired records, a huge penalty will be imposed on them. The minimum amount would be Rs 2 lakh, while maximum would be 10 per cent of the GST shown in the last one year,” said Mohamman Aqib.

He said from January onwards, the government has made it mandatory for certain products not to be sold without ISI mark, still many shops are selling the same, flouting all the norms. “This was an exercise to crack whip against those. Further even the customers are requested to purchase only those toys having the ISI stamp,” he added.

The raid was conducted for over two hours.