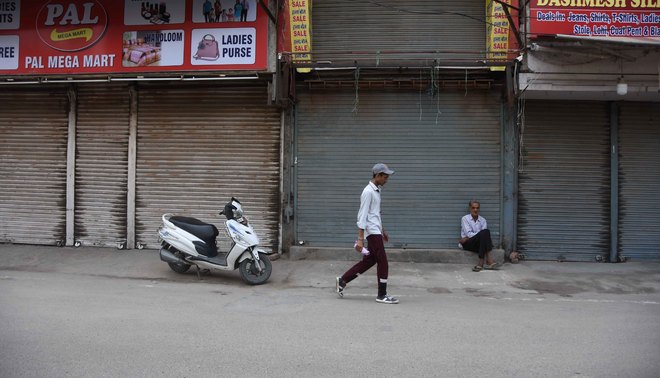 On the call by the Sanyukt Kisan Morcha for Bharat bandh, almost all main markets of the city remained shut in support of farmers’ demands. Till 4 pm, barring a handful, most of the shops/showrooms remained shut and the roads presented a deserted look in otherwise congested industrial city.

The farmers had blocked the main entry and exit points in the city and there was hardly any traffic on the roads. The morning supply of vegetables/milk and other necessary items took place till 10 am, after which there was warm response to the bandh by the traders/shopkeepers.

There was complete bandh till around 4 pm. A shopkeeper in Ghumar Mandi said he had opened the shop for about half an hour so that milk and daily need products could be supplied to consumers. “Otherwise I totally support the farmers’ cause and concern,” he said.

Even the managements of playway schools had shut the schools today due to the call. A principal of a playway school in interior part of the city said they felt bad to call parents not to send wards to school. “After much pressure, we had convinced the parents to send wards to the school after the pandemic and today again, we had to shut it and we felt bad,” the principal said.

Meanwhile, industrialists in the city had to face inconvenience as their labour was not allowed to reach to workplaces in many areas. Pankaj Sharma, general secretary, CICU, and president, Association of Focal Point Industries, said, “In most parts of the city, the labour was not allowed to reach factories. With all commercial establishments and showrooms being shut, the business could not function smoothly. Almost all factories remained shut so as not to face the ire of protesters and a few to express solidarity with farmers.”

He said there should be an open space or a ground to hold such protests outside the city. “Protesters can sit there, hold press conferences and mention the grievances in a record book. Government representatives should go there and receive their memorandum. Why disrupt the daily life which affects the economy?” Sharma said.

He added that a lot many people blocking roads have nothing to do with agriculture or farm Laws. Some of them are factory workers who are allured with free food. “Although we support the cause for which farmers are protesting and appreciate their peaceful way of holding protests, But bandhs in any form affect the business and disrupt the life of a common man. Bandhs in all forms should be condemned by all. It is high time that politicians stop taking common man for a ride. The estimated loss of business and economy in Punjab by this bandh is around Rs 500 crore,” he claimed.

Amit Thapar, MD, Ganga Acrylics, and vice-president, CII, Punjab, said, “For me it is not about the farm laws. I don’t support any cause which in form of protest denies me my right to livelihood. Disruption is not a solution and you cannot force people to close down workplaces. Anyone who wishes to be part of the protest can voluntarily close down his shop/factory and keep it closed for as long as he wants. But none has the right to ask me to close my premises,” he said.