Without medical officer or pharmacist, 3 ANMs are running the show 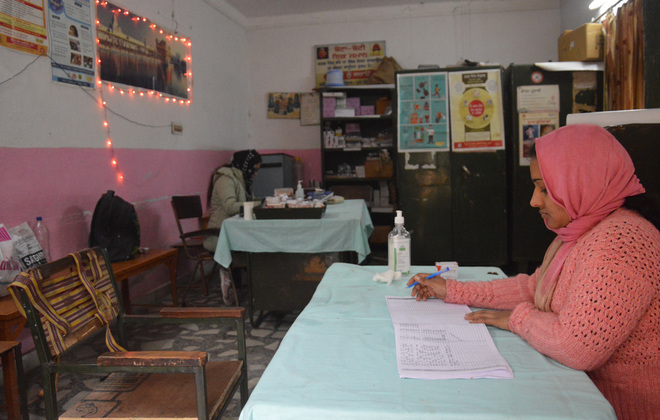 Of the three ANMs who are running the government dispensary at Field Gunj, two will be transferred by the month-end. Tribune photo

Nestled inside a gurdwara, this government dispensary is located inside busy lanes of Field Gunj.

While entering the gurdwara premises, one can see ‘dispensary’, written by hand and almost faded, on a wall to guide visitors towards the dispensary.

With no medical officer or pharmacist, only three ANMs are running the dispensary. A single room is dedicated to the dispensary which has been given by the gurdwara authorities.

Of the three Auxiliary Nurse Midwives (ANMs), two will be transferred by the month-end. The staff is not aware about any new appointments in their place.

The dispensary has a designated strength of five ANMs, one public health nurse, one lady health visitor, a Class IV employee and one sweeper. Recently, two ANMs and a public health were transferred and nobody was appointed in their place.

“We do not have a Class IV employee and a sweeper at the dispensary and staff share the expenses of the job done by a private sweeper. We pool in money and get the premises cleaned,” said an ANM.

The medical officer from the dispensary of Kidwai Nagar is called by the staff when any patient asks for consultation.

Besides, the staff are being shifted to other places for Covid duty. As a result, the number of patients visiting the dispensary has decreased.

“All staff members were given duties at flu corner due to which the OPD at the dispensary has been affected and the number of patients visiting it every day has also gone down,” said an ANM on duty.

Other major problem that is being faced by the dispensary is space crunch. There is only one room dedicated to the dispensary and no store room is available. The staff are forced to store articles in the room. The bed supposed to be used for patients is being used for storing discarded stuff.