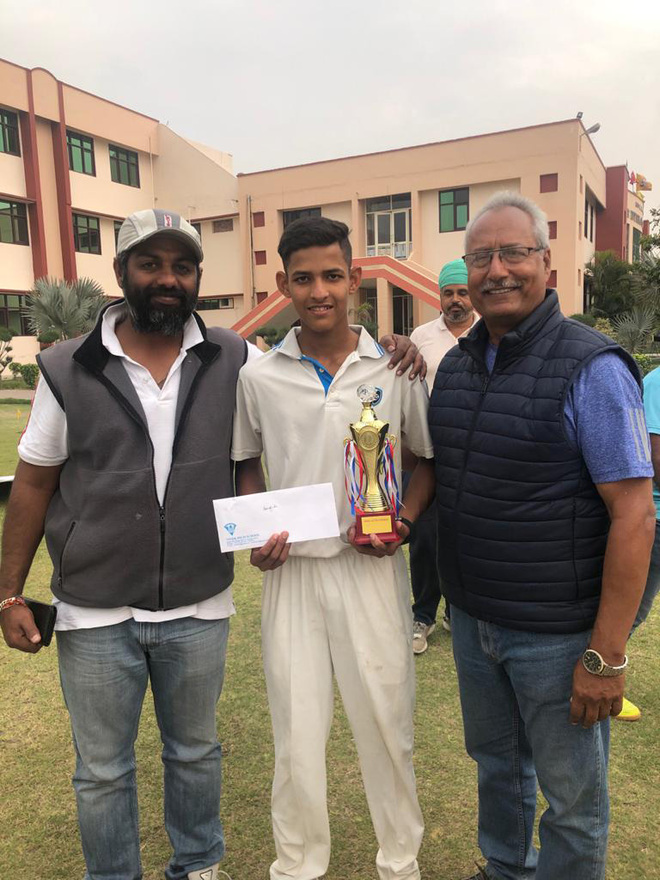 Ludhiana captain Shabad Tangri poses with his Man of the Match award in Moga. Tribune photo

Leading from the front, Ludhiana skipper Shabad Tangri excelled with the bat and ball to anchor his team to one-wicket victory against Moga and secure a berth in the final of the PCA Trident Cup Inter-District (U-16) Cricket Tournament.

The semi-final was played today at Moga, in which Ludhiana managed to scrape past and set up the title clash with Amritsar. The final is scheduled to be held on April 9 at Maharaja Yadavinder Singh International Cricket Stadium, Mullanpur, near Chandigarh.

Moga captain Harish Kumar won the toss and chose to bat first. They were off to a solid start with the opening pair of Manveer Singh and Kabir Malik putting on 93 runs on the board.

After Kabir’s departure at individual score of 31 runs, Manveer was joined by Harish Kumar and the duo took the score to 134 before the latter left after scoring 19 runs.

Hosts went on to lose wickets at regular intervals but Manveer held his forte to help his team reach somewhat a respectable total. He eventually was out after contributing 110 runs off 134 balls including 11 hits over the ropes.

For Ludhiana, Shabad Tangri was the most successful bowler, scalping three wickets for 46 runs while Vivek and Karan Jot secured one wicket each.

Ludhiana began their chase on a shaky note, losing first wicket on 16. They found themselves struggling as they were five down for 118 after 28.4 overs. Then Shabad, in association with wicket-keeper-batsman Himanshu Prajapati, pulled their side out of woods and took it near to the target.

Shabad scored 91 runs off 107 balls, laced with eight boundaries and Himanshu made an invaluable contribution of 49 runs with the help of three fours.

Ludhiana finally achieved the target through last pair of Vivek and Anmoljeet Singh (240 for 9) with eight balls to spare.

For the losing side, Harish Kumar took three wickets while Harmanjot Singh grabbed two wickets whereas Gurkirat Singh and Meetangad Singh Sembhi captured one wicket each.

For his fine all round performance, Shabad Tangri was adjudged the Man of the Match.

Ludhiana will clash with Amritsar, who beat Sangrur by nine wickets in the second semi-final played today at Sangrur.