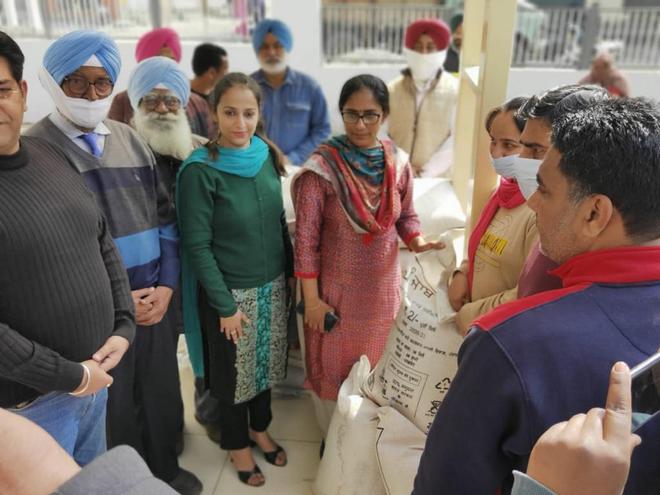 A gathering at the launch of the subsidised wheat distribution scheme in Ludhiana on Saturday. Tribune photo

The smart ration card holders have started getting subsidised wheat at their doorstep at Rs2 per kg. The distribution scheme was kick-started by the Food and Civil Supplies Minister Bharat Bhushan Ashu’s councillor wife Mamta Sharma in Ludhiana on Saturday.

A total of 1.45 crore beneficiaries enrolled in 38 lakh smart ration cards have been covered under the subsidised wheat scheme in the state. In Ludhiana, 4.45 lakh families have been given the benefit of the scheme.

The scheme, covered under the National Food Security Act (NFSA), which was launched by Chief Minister Capt Amarinder Singh in September 2020, entitles each beneficiary biannual supply of subsidised wheat in one go. The Food and Civil Supplies Department directly distributes the foodgrain directly to the beneficiary, who gets the wheat in jute bags to be retained by him.

The beneficiaries, who were verified on the basis of Aadhaar card, reserve the right to approach consumer court, if he fails to get wheat as per his entitlement. Under the scheme, wheat was delivered in the 30-kg standard packing. The department officials work in coordination with the beneficiary, transporter, gram panchayat and supervision committee for the transparent disbursement of wheat.

With no upper cap, every member enrolled in smart ration card gets 5 kg wheat per month.

The Centre had capped the maximum number of beneficiaries at 1.41 crore and, despite repeated requests, had not agreed to provide subsidised ration to the deserving 9 lakh people not covered under the NFSA in the state. Subsequently, the state government had decided to cover all such left-out eligible persons under a State-funded scheme.

Launching the scheme in the Sunet locality of the city, Mamta said the state government had brought complete transparency in the distribution of wheat to the needy through the EPos machines and the programme had become a boon for the poor families by ensuring the distribution of the foodgrains to the real beneficiaries.