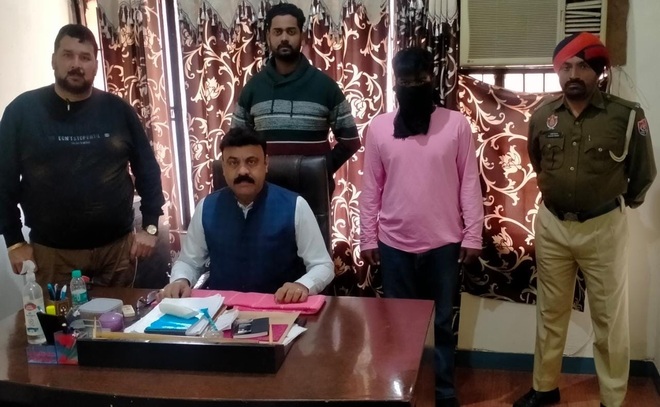 The accused in police custody in Ludhiana. Tribune Photo

The anti-narcotics cell of the Ludhiana police today nabbed a notorious smuggler. The police recovered 260 gm of heroin and one 9 mm pistol from him.

The accused has been identified as Tanu Sidhu of Dr Ambedkar Colony. He is a sanitation worker in the Municipal Corporation, Ludhiana. A case under the NDPS Act has been registered against the accused.

Inspector Rajesh Kumar in-charge, anti-narcotics cell, said a tip-off was received that the accused was into the notorious drug trade and he was going to deliver a huge quantity of heroin to his clients.

Accordingly, the police laid a trap and nabbed the accused with 260 gm of heroin.

The inspector said the accused also had a notorious past as two cases of drug smuggling were already registered against him in the past.

“We will get the accused on police remand so that the entire drug supply line could be busted and major suppliers could be nabbed. The illegal weapon was procured by the accused recently from some weapon supplier and the police will also identify the latter,” Rajesh said.