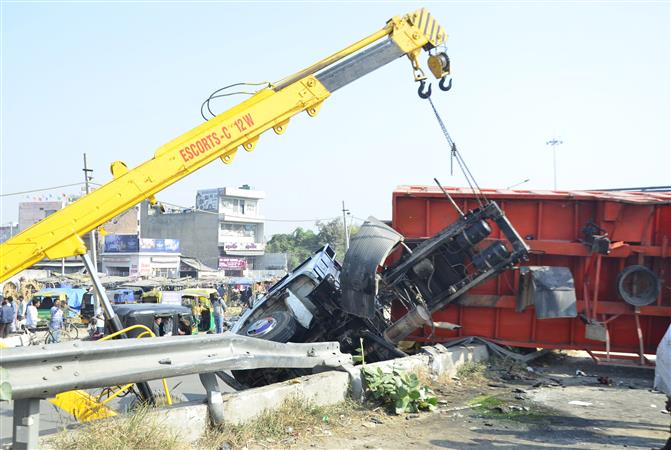 A crane removes the truck from the flyover at Sherpur Chowk in Ludhiana on Sunday. Himanshu Mahajan

In a major incident, a speeding truck rammed into a Maruti Brezza vehicle on a flyover on the Sherpur chowk last night. Though drivers of the truck and the SUV did not suffer any major injury, both vehicles had badly damaged in the mishap.

As per information, the truck was going at a high speed and when it was trying to overtake Brezza, the vehicle rammed into the SUV. Afterwards, it overturned on the flyover.

The impact of the mishap was so intense as Brezza got badly damaged and all its airbags were opened.

Truck driver Anees said he had loaded bags of rice from Amritsar and the same were supposed to be delivered somewhere in Uttar Pradesh. “After the incident, some passers-by took me and the SUV driver out of the vehicles,” he said.

After the truck overturned, the loaded bags of rice also fell on the road and some passers-by took away the bags.

The driver of the SUV, Vikas, said the truck driver was overtaking him at a high speed during which the truck rammed into his vehicle. In fact, the SUV was dragged by the truck on the road for some time, due to which it was badly damaged. Vikas said the airbags which opened on time saved his life.

PCR ASI Gurjant Singh said the drivers of the truck and the SUV were holding each other responsible for the accident and a police probe would find the reason of accident and legal action would be taken accordingly.