Raises questions over govt move to set up industrial park near river, forest 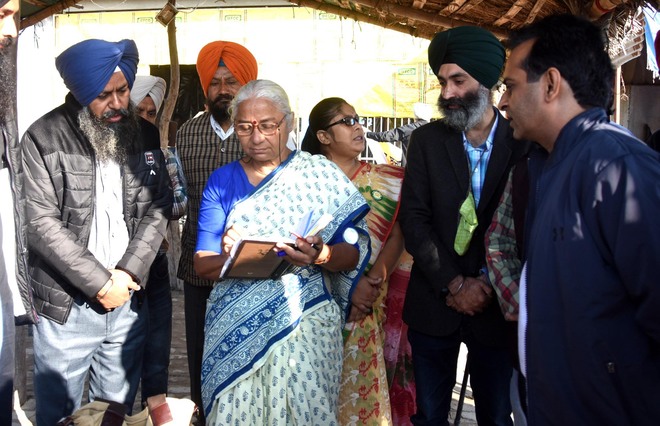 Noted social activist and environmentalist Medha Patkar on Sunday gave a message to people to start ‘Jan andolan’ to save the Sutlej, Mattewara forest and Buddha Nullah.

Patkar (66), who has led the ‘Narmada Bachao Andolan’ to save the Narmada for 32 years, along with members of a public action committee (PAC) visited the Mattewara forest area and the Sutlej banks on Sunday. She raised questions over the state government’s plan to set up a modern industrial park at an eco-sensitive site near the forest and river bank.

Patkar raised the slogan ‘Jungle Bachao, Desh Bachao’ at Mattewara. She also launched the ‘Sutlej Bachao, Punjab Bachao’ campaign in the presence of PAC members who have been protesting against the proposed modern industrial park site.

She interacted with residents of Sekhowal who have been protesting against the proposed industrial park to be set up near the forest and the Sutlej. They were dependent on the village land that has been acquired for the industrial park.

She was also surprised to see big heaps of sand along the Sutlej. Patkar demanded a probe to find whether the mining was done illegally or legally there.

She said they were working to protect the Narmada as they consider it their mother and the Sutlej in Punjab deserves the same level of respect and protection. It was also a source of drinking water for millions. She asked people to raise their voice to save their river.

The social activist also visited Dhanansu village today and raised questions as a large pipe for discharging waste from a hi-tech industrial valley has been linked with the Buddha Dariya. The PAC members said no effluent treatment plant had been set up in the valley so far.

Patkar was also shocked to see the black polluted water being released into the drain from the STP at Jamalpur here.

Sharing the success of jan andolans, she advised people to sit on andolan till the nullah is made pollution-free. She advised them to question their elected representatives regarding these issues.

She assured to raise the issue of environment protection of the state in the meeting of the Samyukt Kisan Morcha as well.

She said the state government should conduct a discussion on the issues and clear its stand.

Meanwhile, Patkar launched a ‘Green manifesto’ and website www.greenmanifesto.info which outlines major environmental concerns of citizens and aims to persuade all political parties of Punjab to give prominence to such environmental issues in the upcoming 2022 state Assembly elections.