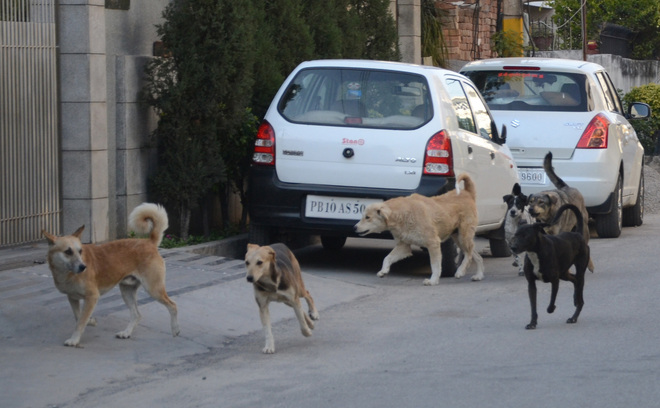 A view of stray dogs in Ludhiana.

During the visit, Sandhu instructed the officials concerned at the ABC Centre to achieve the given target of sterilisation of 1,800 dogs every month so that almost all the stray dogs of the city are sterilised before March 31, 2023.

Sandhu has also appealed to dog lovers, animal organisations’ activists, pet owners and NGOs concerned to cooperate and get bitches sterilised at the ABC Centre.

MC Commissioner Pardeep Kumar Sabharwal said that the ABC Centre under the Ludhiana MC, set up at the Haibowal Dairy Complex, Ludhiana, is the biggest animal birth control centre in North India. The commissioner said, “The centre has been upgraded with the construction of new operation theatres and dog kennels and increased its capacity to handle more cases per day. The MC has spent crores of rupees for the sterilisation of dogs in Ludhiana.”

Senior Veterinary Officer, MC, Dr Harbans Singh Dhalla said the new firm, which is looking after the sterilisation of dogs project, has appointed three veterinarians at the ABC Centre.