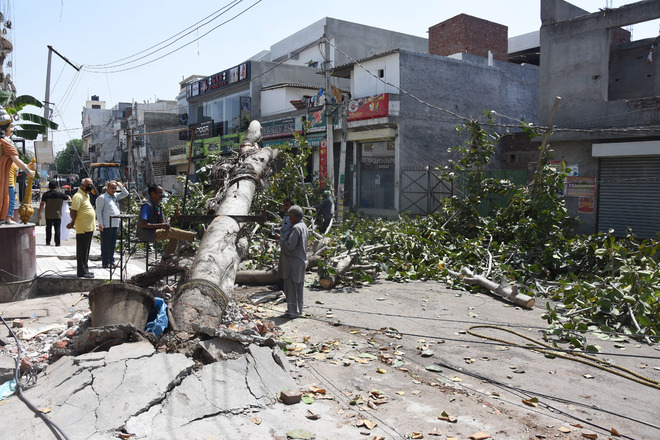 As high-velocity winds lashed the city on Tuesday night, 24 trees got uprooted at different locations in the city. Wheat crop also reportedly got flattened at some locations due to the storm.

After trees fell down on some roads in the city due to the storm, traffic movement also got affected there. A tree fell near the birth place of Shaheed Sukhdev Thapar at Naughara Mohalla, Ludhiana. Trees also fell near the ADC office, near DAV School at BRS Nagar and near Dasehra ground.

The Municipal Corporation’s horticulture wing officer Kirpal Singh said they got information that around 24 trees fell down on roads as the storm hit the city last night. He said the traffic movement got affected at some locations due to the falling of trees.

He said trees fell on roads near Pahwa Dharamshala, Upkar Nagar, near Baba Deep Singh Gurdwara and some other locations. A tree fell on wires near the Mayor’s office at Rishi Nagar.

“We have deployed staff to clear the blocked roads due to falling of the trees. The work will be completed at the earliest,” he said.