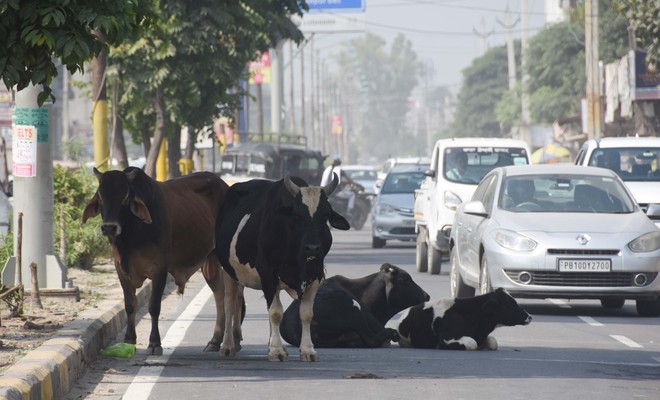 Not learning from the mishaps caused by the stray cattle in the past, the Municipal Corporation here has once again failed to clear city roads of the abandoned animals.

While many have suffered serious injuries, some have even lost their lives in the accidents caused by the stray animals. However, the civic body seems to be least bothered about the threat these stray animals pose to the motorists and people in general.

Every year, MC generates crores of rupees as cow cess, but a large number of stray cattle could be seen roaming around the city.

Even in the posh areas, residents complain about the stray cattle. “The winter season is near and chances of mishaps remain extremely high with the presence of stray cattle on the roads during foggy days,” said Jagjit Singh, a resident.

“Such incidents could be fatal for both humans and stray cattle. The government authorities must ensure shifting of the stray cattle to safe shelters before the arrival of the winter season,” he said.

The MC had earlier this year announced to start a drive to shift the stray cattle to various shelters, but hundreds of these could still be spotted on the city roads.

“A number of persons have died in accidents due to stray cattle. Also, a few persons have lost their lives when they were attacked by stray cattle in the Ludhiana East areas. The MC collects a huge amount of cow cess, but the welfare of stray cattle is being ignored,” said AAP leader and former councillor Daljeet Singh Grewal.

Whenever an accident happens, there is a lot of hue and cry and MC vows to get rid of the stray cattle, but nothing is done on ground, he said. “A large number of cattle head are still roaming across the city. The government should ensure shifting of stray cattle to shelters at the earliest.”

Senior Veterinary Officer of the MC, Dr Harbans Dhalla claimed that the stray cattle were being shifted to shelters.

“The government has approved around Rs99 lakh for setting up gaushalas at Burj Pawat. Around 500 cattle will be shifted there. Stray cattle will also be shifted to new gaushalas in the city soon,” said Dr Dhalla.