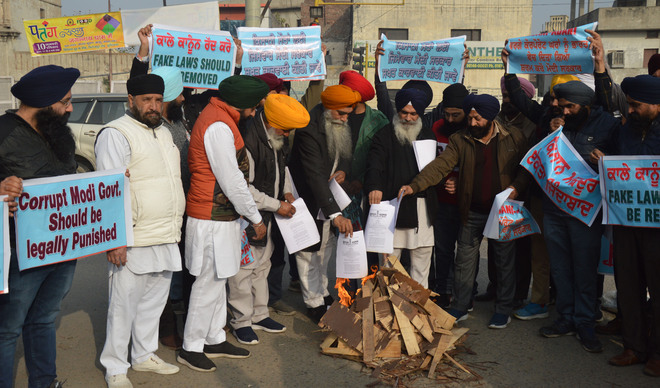 Members of the All India Sikh Students Federation burn copies of the farm Acts in protest in Ludhiana. Photo: Inderjeet Verma

Members of the All India Sikh Students’ Federation burned copies of the farm laws on the occasion of Lohri on Wednesday in Ludhiana.

Expressing their protest against the BJP-led Central Government, the members blamed that the Centre was responsible for deaths of those farmers who died during the farmers’ protest in Delhi.

Senior members Paramjit Singh Khalsa, Major Singh Khalsa and Daler Singh, along with other members, gathered in the city and burnt the copies of the farm laws to mark their protest.

They said: “The Narendra Modi-led Central Government is introducing anti-people policies. We burnt the copies of the black laws today. Actually, the Centre is acting like a puppet of some corporate houses. If anyone raises voice against the Union Government, he is defamed with false allegations.

“The farm laws are not only anti-farmers but also against people, hence these should be repealed. We will intensify the agitation,” said Daler Singh.