Cop, who was into drug trade for years, is himself an addict 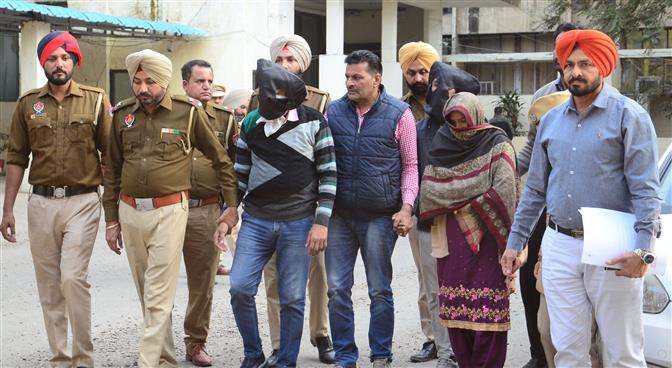 The suspects in police custody in Ludhiana. Ashwani Dhiman

The Special Task Force (STF) wing of Ludhiana today arrested a sub-inspector (SI) along with his two aides and seized 846 gm of heroin from them. The policeman was posted as the additional SHO at the Police Division 5 in the Ludhiana Commissionerate.

The suspects have been identified as SI Harjinder Kumar (50), Harjinder Kaur (35) and Rohit Kumar (20) both residents of Phillaur, Jalandhar.

Sharma said when the STF team, led by inspector Harbans, was present near the Jassian T-point where they received a tip-off that the policeman of the Ludhiana police was into the drug smuggling trade and he was on the way towards Basti Jodhewal from Ladhowal to supply heroin to his clients on his motorcycle (bearing registration PB06 A L9423).

Accordingly, the police party laid a trap at a strategic place where the motorcycle of the alleged policeman, was intercepted by the STF personnel. Later during frisking of the SI, 16 gm of heroin was recovered from his pocket, the AIG said.

During preliminary questioning, the policeman confessed that he was running a heroin smuggling racket along with his two aides Harjinder Kaur and Rohit. Following which, the team laid a trap and caught the other two suspects with 830 gm of heroin. The policeman also admitted that he always wears police uniform whenever he used to deliver the consignment of heroin. STF officials said the SI was into the trade for the past few years and he himself was also a heroin addict.

Harjinder Kaur confessed that she was into the drug trade for the past over 10 years and she also has a criminal past as several cases of heroin and puppy husk smuggling were already registered against her at the Phillaur police station. Rohit admitted that he was working at a Cremica factory in Phillaur and one case of smuggling was already registered against him in the past.

SI Harjinder Kumar during his posting in Phillaur had once nabbed Harjinder Kaur with drugs. Later, he developed a friendship with the woman and later they agreed to start heroin smuggling together. The woman agreed to accept the policeman as the partner in drug smuggling as he could supply drug in police uniform and they could easily cross nakas.