Sub-inspector, 2 others arrested for extortion in Ludhiana

Took Rs7L from dealer who landed in their honey trap 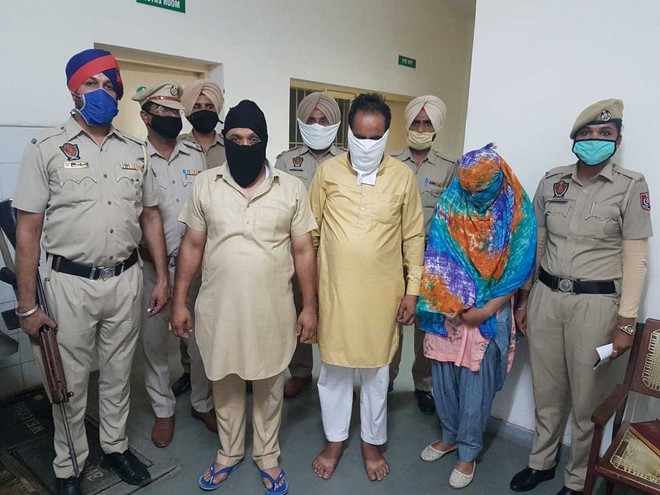 Sub-inspector Dharminder Singh and his accomplices in police custody in Ludhiana. Tribune photo

The police have arrested SI Dharminder Singh, posted at Daba police station, along with a woman of City Enclave on Dhandra Road and Sukhwinder Singh, who claims to be a press reporter and is resident of Dhillon Nagar, Lohara, on the charges of extortion, issuing threats of blackmailing, forgery and cheating.

Daba SHO Pavittar Singh said a property dealer, Vijay Kumar, who resides at Canal Colony, Brahaman Majra, had lodged a complaint that he had developed friendly relations with Manjit Kaur, who had met him last year in connection with purchase of a plot.

“We had several meetings and also frequently talked on the phone. On June 24, I had physical relations with Manjit in the office of one of my friends with mutual consent. However, the very next day, I received a call on my mobile phone and the caller said he was a police sub-inspector posted at the Daba police station and wanted to meet me,” said the complainant.

The victim further told the police that Dharminder, along with Sukhwinder, met him and the duo threatened that they had a video of my physical relations with Manjit which they would make viral if I did not pay them Rs 50 lakh.

“However, the deal was struck for Rs 10 lakh and thereafter the police official continued to put pressure on me for payment. Yesterday, the duo came in the afternoon in a Swift Car (PB-11CS-6062), took Rs 7 lakh from me and went away,” alleged Vijay.

The Daba SHO said on receipt of the complaint, a preliminary investigation was carried out and the three suspects were arrested. Rs 7 lakh extorted by them from the complainant was recovered from them. The police also seized a car and three mobile phones of the suspects. Further investigation was in progress.