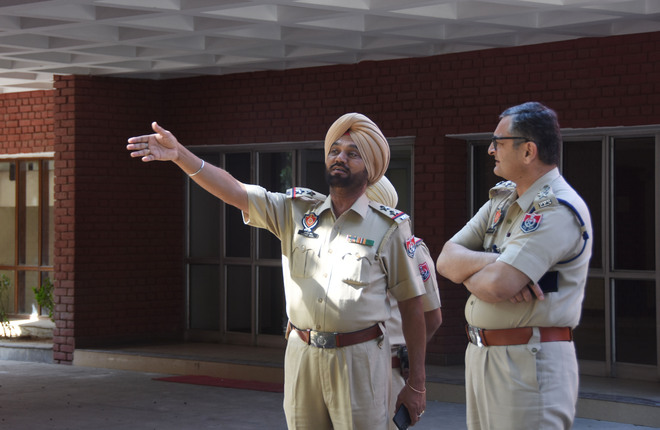 Police officials make security arrangements at the Circuit House ahead of the CM’s visit in Ludhiana. Himanshu Mahajan

Ludhiana has emerged as the most preferred investment capital of North India and the second day session of the Progressive Punjab Investors’ Summit-2021 here on Wednesday will help attract more investment to the industrial capital of the state, said Chief Minister Charanjit Singh Channi.

In an exclusive chat with The Tribune after launching the first day’s virtual session of the two-day summit, Channi said the Congress government’s robust industrial ecosystem, conducive business environment and forward-looking industrial policies have fetched investments worth Rs 99,000 crore in over 3,000 project proposals received during the last four and a half years.

He said almost 50 per cent of the investors have already begun their commercial productions in different parts of the state while the rest are in the advanced stage of commencing their operations.

Extending warm welcome to the investors and industry captains, the Chief Minister said the hi-tech valley in Ludhiana has already attracted prominent industry players such as Hero Cycles, Aditya Birla Group and JK Paper Limited. Hero Cycles Limited has already set up their anchor unit with a production capacity of 4 million bicycles per annum, especially e-bikes and premium bikes.

Similarly, Aditya Birla Group has proposed to invest around Rs 1,000 crore in the hi-tech valley, where they have purchased 61 acres of land at the cost of Rs 147 crore. The group plans to enter the paint manufacturing business where the latest manufacturing technology and industry 4.0-based tools will be deployed.

The latest entrant is JK Paper Ltd, which will start construction of its proposed plant shortly and commence commercial production by end of 2022 as the state government has been providing a high-quality plug and play infrastructure to potential investors, which has proved instrumental in attracting investments to the otherwise landlocked state.

JK Paper Ltd has chosen Punjab for its maiden entry into the new business vertical of corrugated packaging manufacturing with proposed investment of Rs 150 crore after being allotted 17 acres of land at the hi-tech valley in Ludhiana in August.

Emphasising the state’s vision to be the most preferred investment destination, Channi assured the investors of fulsome support from the government for their upcoming project and promised conducive environment for development of the industry in the border state.

Meanwhile, Principal Secretary, Industries, Commerce and Investment Promotion, Tejveer Singh apprised the investors of the state government’s one-of-its-kind investment promotion agency Invest Punjab, which has been recently rated as the top-performing agency by the Union Government.

The CM’s Principal Secretary Hussan Lal said the government is committed to providing a conducive and sustainable ecosystem to boost industrial development and create humungous entrepreneurial opportunities for the youth in the state.