MC, residents making efforts to catch canine; announcements being made to alert people 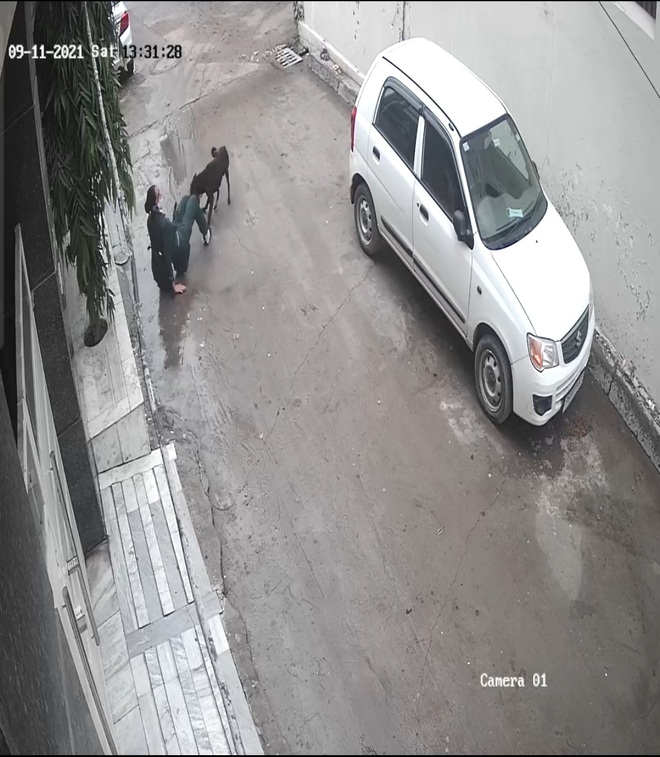 A CCTV grab shows a girl being attacked by a suspected rabid dog at Chandar Nagar in Ludhiana. Tribune photo

A suspected rabid dog has attacked 11 persons in Chandar Nagar and nearby areas in the past two-three days. Announcements are being made through loudspeakers at religious places and other sources to alert the residents to protect themselves from the dog.

A video of the black stray dog attacking a girl in Chandar Nagar on Saturday afternoon has gone viral. A few women came to her rescue but she received multiple injuries.

In another incident, Priya (35) was bitten by the same stray dog near her house. She is currently under treatment at Dayanand Medical College and Hospital (DMCH). “I have received deep wounds in the attack by the stray dog. I was admitted to the hospital on Saturday night. When I reached the hospital, I came to know that the dog had bitten eight persons before me,” Priya maintained.

Subash Sood (70) said, “A black stray dog attacked me just outside my house on Saturday night. The dog bit both my legs and then ran away. I have got a dose of anti-rabies vaccine. The government must take the matter seriously as some other persons have also been attacked by the dog.”

Residents, along with teams of the MC, were trying to find the dog but it is yet to be caught. Activist Keemti Rawal said, “In Chandar Nagar alone, at least eight persons have been bitten by the suspected rabid dog. Along with civic body officials, we are looking for the dog.”

He also questioned the MC for failing to ensure vaccination of stray dogs to prevent rabies. “The MC should make necessary arrangements to ensure the safety of people. Stray dogs must be vaccinated timely for the prevention of diseases. It has also come to light that the population of stray dogs is increasing in our area, despite the MC’s claims to carry out sterilisation drives for a long time,” he added.

MC’s Senior Veterinary Officer Dr Harbans Dhalla said they had been looking for the suspected rabid dog since Saturday. “We don’t have the exact figure of the victims. But we learned that the dog has attacked 10-11 persons in Chandar Nagar, Vivek Nagar and Shahi Mohalla. We have talked to three councillors of the areas concerned and efforts are being made to catch the dog,” he added.