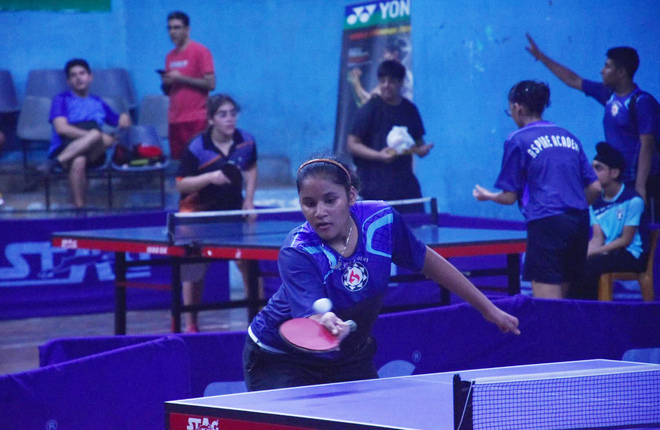 A match in progress at the Ludhiana District Table Tennis Tournament on Sunday. Himanshu Mahajan

Jasmeen along with Vihaan, Ishreen and Aryan, wrapped up titles in their respective age groups on the second day of the Ludhiana District Table Tennis Championship, being held at Shastri Hall, near Guru Nanak Stadium, here on Sunday.

In the girls’ singles U-15 group, Jasmeen prevailed over Sanya 3-1 to clinch the title and in the boys’ section in the same age category, Vihaan proved too good for Aryan whom he beat in straight sets (3-0) to lift the title.

However, in the boys’ singles U-17 section, Aryan came out triumphant as in the final he quelled a strong challenge from Bhayam before stitching it up 3-2 to annex the title.

In the girls’ singles U-17 group, Ishreen faced a little resistance from Sehajpreet as the former emerged victorious 3-1 to lay her hands on the winners’ trophy.

In the U-19 category, Ishreen and Sehajpreet in the girls’ section while Gautam and Vivek in the boys’ group, registered victories in their respective semifinals to secure berths in the final.

In the girls’ section, Ishreen edged out Hargun 3-1 and Sehajpreet scored an identical win over Aishveer to advance into the final while in the boys’ group, Gautam defeated Gurpreet 3-1 and Vivek outwitted Vihaan 3-2 to set up the title clash.