Victim also a teacher; minor was pushed into canal near Ludhiana; no info on second son; suspect at large 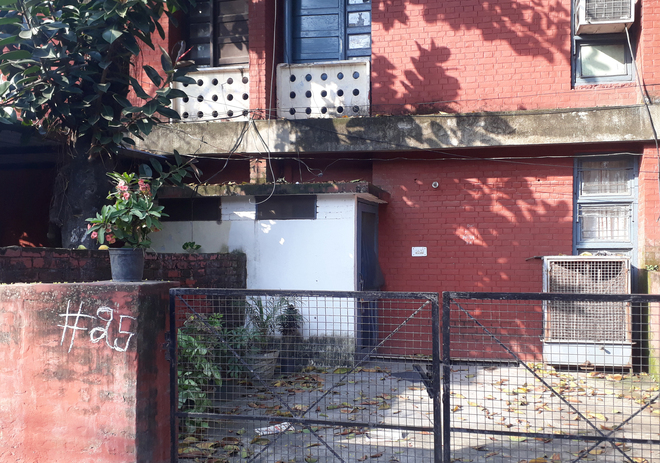 The house where the body of the 40-year-old woman was found in Chandigarh on Wednesday. Photo: Manoj Mahajan

A 40-year-old government schoolteacher was found murdered at her government accommodation in Sector 23 on the intervening night of September 15 and 16. The victim’s husband, Mandeep Singh (43), a teacher at a government school in Sector 47, who is absconding, has been booked on charges of murdering his wife and attempt to murder his elder son. Mandeep tried to eliminate his 13-year-old son Ishmeet Singh by pushing him into a canal near Ludhiana. However, he managed to survive.

The victim has been identified as Jyoti Rani, who was a teacher at a government school in Karsan, Ram Darbar. Her body was found in a pool of blood, wrapped in a blanket with a severe injury on the rear side of her head. She was hit with an object that led to her death.

The police said the victim’s elder son, Ishmeet, stated that on September 13, his father told him and his brother Jashandeep (9) that their mother had tested Covid positive following which she was taking rest in a room on the first floor of the house.

The next morning, on September 14, Mandeep told his sons that he was taking them to a gurdwara in Ludhiana to pay obeisance. He drove his sons to Ludhiana in a Maruti car and later at night took them to a canal near Ludhiana.

Ishmeet, in his police statement, revealed that while his brother kept sitting in the car, his father took him towards the canal and pushed him into it. Fortunately, he managed to survive after which he went to a nearby gurdwara from where the local police were informed. A team of the Katani Kala police post reached the gurdwara.

Ishmeet narrated the entire incident to the police, who then reached Chandigarh on Tuesday night.

Punjab Police personnel informed the Chandigarh Police following which both police teams reached House No. 25 in Sector 23, which was found locked. The police broke the lock and went to the first floor where Jyoti’s body was found.

The spot was videographed. A forensic team also reached there for investigation.

The police said the victim’s mobile phone was not found from the house. It is suspected that Mandeep took the phone along. “The mobile phones of both the victim and Mandeep are switched off,” said a cop.

The police in Punjab and Haryana have been informed about the number of the Maruti car. A team of Child Helpline was informed and Ishmeet was sent to Snehalaya. Sources said Mandeep and Jyoti had met at their workplace after which they fell in love and got married.

Mandeep was not in touch with family

Sources said Mandeep had last spoken to his father, who stays in Fathegarh Sahib, around five years ago. Mandeep’s neighbours in Sector 23 said Mandeep hardly interacted with any of them. Mandeep’s interaction with his colleagues was also very less.