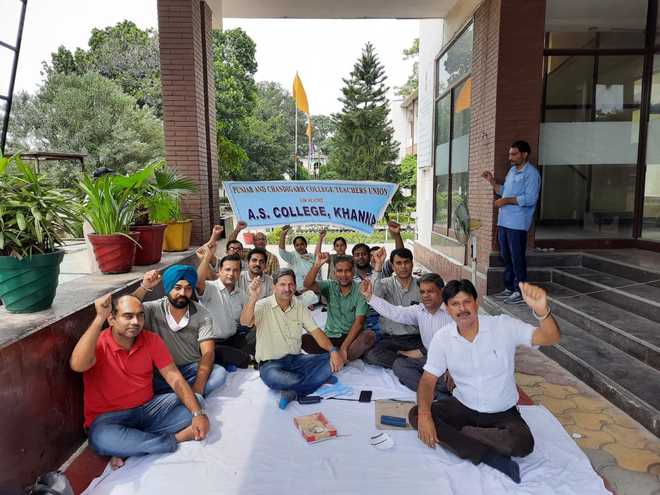 College teachers protest in support of their demand in Khanna on Tuesday. Tribune photo

On the call of the Punjab Federation of University and College Teachers’ Organisations (PFCUTO), teachers from the district sat on a dharna on their campuses and showed solidarity with those participating in the chain fast. University and college teachers from all over Punjab have begun a chain fast against the unwarranted delay in the implementation of the UGC grades in Punjab and Chandigarh by the state government.

District president of PCCTU Kuldeep Batta said, “Twenty-three states have already implemented the UGC pay scales. Punjab has been left behind, this despite the fact that 50 per cent of the share has to be contributed by the Central Government. The state government has literally ruined the future of the teaching community. The new contractual staff, despite being doctorates in their subjects, are forced to work on meagre salary for three years. It is shameful for the government to target the teachers every time. Nothing can be more unfortunate than this.”

Dr Sanjeev Kumar, president, Khanna unit of the PCCTU, said the government had never kept the promises and hence the teachers were frustrated and disgruntled over the anti-teacher attitude of the government. The government has forced us to resort to such a measure by backing away from its words, he said.

President Doraha unit of the PCCTU, Dr Amandeep Kullar, said, “The Employees’ Affiliated Colleges Security of Service Act-1974 should be brought in line with the judgments of the Supreme Court of India. Further, regularisation of assistant professors appointed against 1,925 posts and filling up of vacant positions in the higher education system should be accomplished on the basis of priority.”

Dr Vinay Sophat, president, PCCTU, said there was no looking back for us now. The UGC pay scales, announced with the Pay Commission Award, were nowhere in sight. The teachers were the only ones now whose pay-scales were yet to be revised. They had been impressing upon the Punjab Government and the Chandigarh Administration to do the needful but to no avail.

Dr. Jagwant Singh, general scretary, PFUCTO, said, “ The Punjab Government decision to delink the UGC pay scales is an assault on the young teachers that will eventually marginalise teachers of Punjab from the national mainstream. All constituents of the PFUCTO will participate in the chain fast on rotation basis till all demands are met by the state government. The Government of Punjab and UT Administration is thrusting the protest on them at a time when they want to rectify the situation emerging out of Covid, which has impacted the quality of instruction as well as the academic calendars of the universities and colleges,” he added.