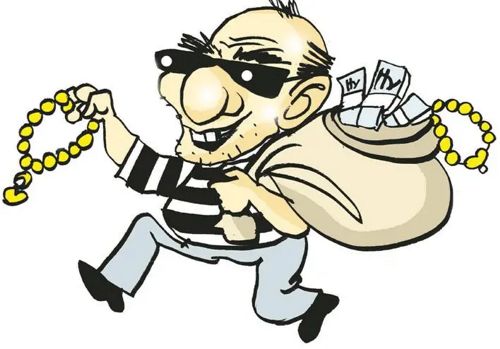 Thieves and snatchers had a free run as the police have registered as many as six cases involving snatching of cash from a grocery shop and a mobile phone, theft at a house, a hosiery factory and two other grocery stores in various parts of the city in the past over 24 hours.

Devinder Singh, owner of a grocery shop in Ishar Nagar stated that two persons riding a motorcycle came to his shop to make some purchase. As he was alone at that time, the duo took away Rs 5,000 in cash from his cash box at sword-point and managed to escape. The complainant told the police that he had identified one of the suspects as Satnam Singh, a resident of the same colony. The police have booked the suspects under Sections 379-B(2) of the IPC.

In other incidents, two grocery shops, on Tajpur Road and Metro Road, were burgled in the city. Rajesh Kumar of Baba Namdev Colony on Jagirpur Road lodged a complaint stating that thieves had broke into his shop and had stolen around Rs 18,000 in cash and some grocery items. Owner of the shop on Metro Road Naresh Chadha, a resident of PHG Colony, Jamalpur, told the police that thieves had taken away Rs 32,000 in cash and some packets of almonds from the shop. The police have registered cases against unknown persons and started investigation.

A hosiery factory owner, Harpreet Singh, a resident of Pritam Nagar, Model Town, lodged a complaint with the police that on the intervening night of November 16 and 17, thieves broke open an iron grill of the factory and escaped with 35 boxes of yarn and a Mahindra Bolero vehicle, parked on its premises. The police have booked unidentified persons under Sections 457 and 380 of the IPC.

In another theft, a house in the Ganesh Nagar area was burgled on the midnight of November 16 when its occupants were asleep. Intruders broke open an almirah and managed to escape with gold jewellery and around Rs 1 lakh in cash. On the complaint of Ravinder Kumar, the police have registered a case under Sections 457 and 380, IPC.

In an incident of snatching, the mobile phone of Rajesh Kumar of New Sant Nagar was snatched by two persons riding an Honda Activa scooter (bearing registration no. PB 10DG 2311). The victim was going on foot from the DMC Hospital side towards Bank of Baroda in Tagore Nagar. On the basis of information provided by the complainant, the police have identified a suspect as Jagjit who has been booked under Section 379-B of the IPC.