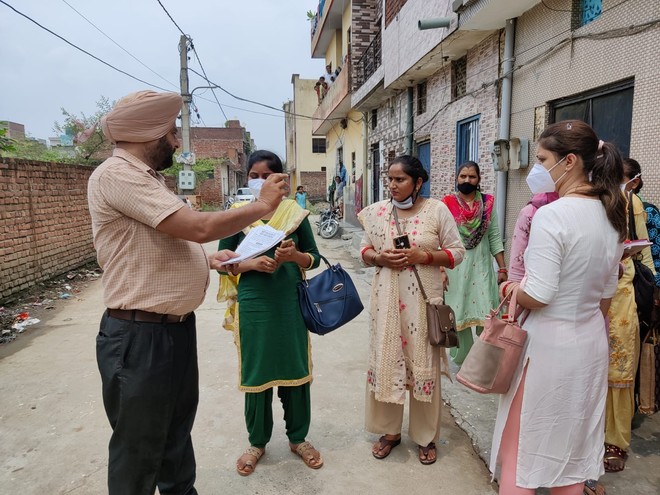 Health officials during a door-to-door survey at Ambedkar Nagar.

Now, that Covid-19 cases have started showing a downward trend, three cholera cases from three areas has put the Health Department on its toes.

The positive cases include two infants. Teams of the Health Department are visiting the three areas, doing a house-to-house survey, creating awareness and distributing ORS packets. The health officials have confirmed the three cases today.

Cholera is an infectious disease that causes severe diarrhoea. It can lead to dehydration. It is caused by eating contaminated food or drinking water.

From Shivaji Nagar, a two-year-old child has been confirmed as a cholera case.

The source of drinking water in the area is a MC tap. The patient has consumed food from outside a day before symptoms showed up. Five water samples and three stool samples have been collected from the area today. The child, who was admitted to the DMCH, was discharged this evening. In Adarsh Colony, a 21-year-old youth was found suffering from cholera. He resides in a migrants’ vehra where eight families stay. Five water samples and two stool samples were collected from the area on Sunday.

One case was reported from Ambedkar Nagar, where a one-year-old child was found infected with the disease. “The department is taking every necessary precautionary step. The hanging drop test of these three patients has come positive while the culture report is pending. No suspected patient was found in these areas. All three areas are located far off and are individual cases so the possibility of outbreak is less but still health teams are visiting these areas and creating awareness among people regarding water-borne diseases. Pamphlets, chlorine tablets and ORS packets are also being distributed in these areas,” said Civil Surgeon Kiran Gill.