Allege harassment by GST officials during raid at hosiery factory 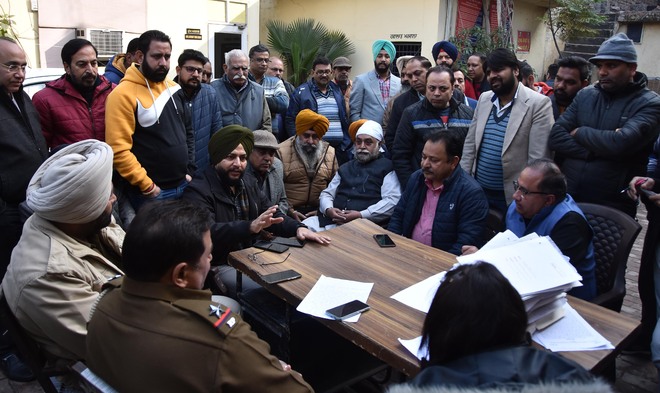 Industrialists submit their complaint to the police against GST officials on Friday. Photo: Himanshu Mahajan

Traders gathered outside the Daresi police station here today to protest the alleged high-handedness of the Central GST Department officials.

The GST officials had raided the premises of a hosiery manufacturer at Bajwa Nagar on Wednesday. The protesters reached the police station and sought the cancellation of the FIR registered against traders and demanded a suitable action against the GST officials who raided the factory and ‘harassed’ the traders. They also accused the officials of demanding funds for a school, for which they were issuing a slip.

The traders threatened to resort to an agitation if appropriate action was not taken against the department officials. Meanwhile, the police officials claimed that the allegations against the GST officials were baseless and the manufacturer against whom an FIR was registered had to pay GST dues worth Rs 18 lakh. The manufacturer called other traders and they together interfered in the working of GST officials and created a ruckus.

Talking to The Tribune, Vinod Jain, vice-president, Vyapar Bachao Morcha, said: on Wednesday, around six persons reached the premises of a hosiery manufacturer in Bajwa Nagar and started asking for documents. They went inside the factory around 1 pm and continued the raid till 8:30 pm.

“I requested them to let me inside, but to no avail. When I managed to get inside, I found the factory owner was being treated badly. Although no incriminating documents were recovered from the premises, yet the officials took Rs 15 lakh from the owner. Not only this, an FIR has been registered against four persons on a complaint filed by the GST officials.

“Strangely, they were carrying no search warrant. They also did not show their identity cards. They issued a slip in the name of a school for which they were collecting money,” alleged Jain, who accompanied the traders to the Daresi police station.

Assistant Sub-inspector Jagtar Singh from the Daresi police station, said: “The trader had to pay Rs 18 lakh as GST. He called upon other traders to join him in the protest. They interfered in the working of government officials and even snatched search warrant.”