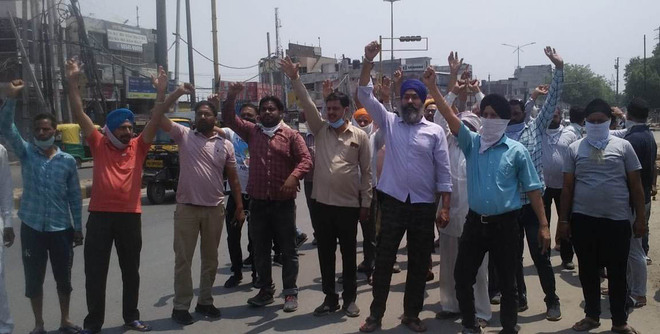 Shopkeepers and members of labour unions during a protest against curfew and restrictions in Ludhiana. Tribune photo

Shopkeepers and vendors of the Jamalpur area and members of a few labour unions staged a protest on Chandigarh Road against curfew and other restrictions. They demanded the government to end the restrictions so that they can work and generate income to meet their daily needs.

The protest was joined by the Karkhana Mazdoor Union, Textile and Hosiery Kaamgar Union and Lok Ekta Sangathan. The protestors alleged that due to the restrictions, they have suffered huge losses.

“The labourers, shopkeepers and vendors among others who suffered losses due to these restrictions and curfew should be given compensation at the earliest”, said Lakhwinder of Karkhana Mazdoor Union. — TNS