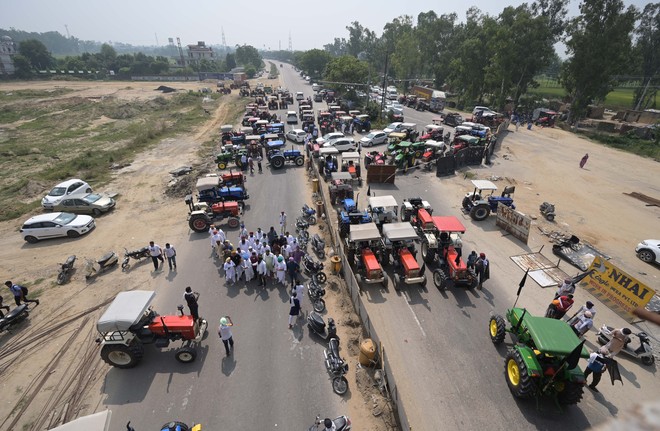 Tractors parked near the Ladhowal toll barrier by farmers as part of the “chakka jam” protest on Friday. Tribune photos: Himanshu Mahajan

In a widespread agitation against farm-related Bills introduced by the Modi government at Centre, farmers, industry, farm workers and SAD activists blocked vehicular traffic on GT Road (NH 44) and other busy roads in the city as part of the ‘chakka jam’ protest.

The BKU activists, led by Bharti Kisan Union-Lakhowal (BKU), squatted on the GT Road near the Ladhowal toll plaze while the SAD workers held a protest near Jalandhar Bypass. Industry and farm workers, led by activists of the Karkhana Mazdoor Union, employees of the PSPCL as well as several other trade unions also held a protest against the farm Bills and to express support to the agitating farmers.

As the Railways had already announced cancellation of most of the Covid special passenger trains in the region as a pre-emptive step, the protesters focused on blocking traffic on the national highway and other busy roads in the city while raising slogans against the Central Government.

The BKU president, Ajmer Singh Lakhowal, said Punjab Bandh called by 31 organisations of farmers was total in the entire state. He said under the garb of restrictions in the wake of pandemic, the Modi government had hurriedly brought in anti-farmer legislations. “In a repressive manner, farmers have been stopped from raising their voice and efforts are being made to destroy the very marketing network for food grain under pressure from multi-national companies and the US,” he alleged.

Making it clear that today’s protest was just the beginning of a crusade by farmers, he said farmers would continue their ‘rail roko’ protest all over Punjab from October 1 to make the Centre see reason and scrap the new legislations.

Lakhowal said the NDA government, led by Modi, had betrayed the farmer community as a whole. “Rather than taking a pro-farmer policy decision to purchase all 23 crops at MSP to enhance income of farmers, the government has chosen to open tax-free mandis for trading of food grain which was nothing less than an open licence to the corporate houses to loot the public and exploit farmers,” he added.

Addressing the protesters, district president of Youth Akali Dal (YAD) Gurdeep Singh Gosha asserted that the SAD had taken a stand against the agriculture-related Bills and the party would continue to fight to safeguard the rights of the farmers.

Farm and industrial workers, led by activists of the Joint Council of Trade Unions, take out a march from Jagraon Bridge to Bharat Nagar Chowk to extend their full support to farmers. Trade union leader DP Maur said by pushing through the farm Bills without any debate in the two houses of Parliament, the Modi government had not only committed murder of democracy but also brought in such legislations which would harm both the producers (farmers) and the consumers.

Members of the Muslim community, led by Shahi Imam Maulana Habib-ur-Rahman, burnt an effigy of the Modi government in front of Jama Masjid in Field Ganj to oppose the farm ordinances. The Shahi Imam said it was beyond comprehension as to why the Centre was bent upon imposing such laws on the farmers in the face of staunch opposition by the farmer community.

The protest by employees of power utility and activists of Technical Services Union witnessed burning of an effigy against farm-related bills, the Electricity Amendment Bill and recently enacted labour code Acts. The union leaders said the farm Bills would worst hit the small and marginal farmers while the big business houses would get a go-ahead to exploit the farmers and loot the public.

To prevent traffic snarls due to the bandh against the farm ordinances, the traffic police on Friday set up 40 nakas in and around the city. Assistant Commissioner of Police, Traffic, Gurdev Singh said maximum diversions were made in the city to prevent traffic snarls at the sites where the protests were held. “More than 150 traffic policemen were deployed at these 40 nakas,” said the ACP. The traffic police were also in touch with their counterparts in Phillaur, Jagraon and Khanna to keep tabs over the movement of vehicles.