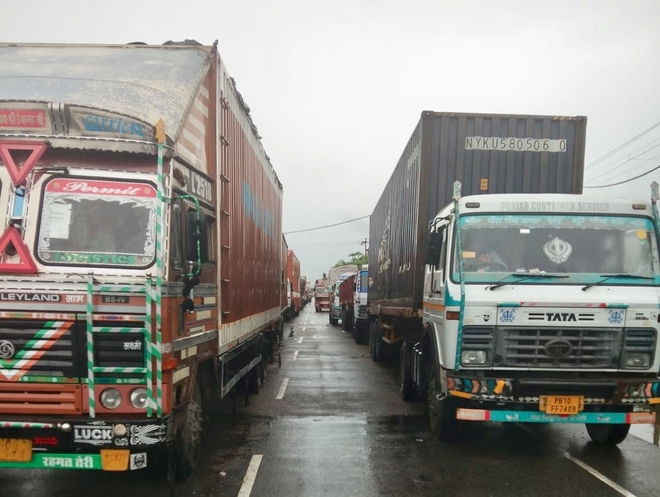 Truck drivers wait for the lifting of blockade from the Ludhiana-Malerkotla road near Ahmedgarh. Tribune photo

Meetings between the Malerkotla district administration and office-bearers of the Katra Express Highway Sangharsh Committee proved futile to persuade protesters to lift the blockade from Ludhiana-Malerkotla road near Kup Kalan.

While thousands of commuters between Ahmedgarh, Ludhiana, Sangrur and Patiala had been risking their life by adopting alternative unsafe routes during rains since Monday afternoon, vehicles plying on long routes have been compelled to discontinue their journey and wait for clearance of the road.

Payment of compensation at market rate, hundred per cent desertion allowance, payment to actual possessor of acquired land in case of joint khewat, construction of irrigation channel on both sides of the highway and construction of service lane were among the major demands of the protesters.

They also demanded that the government should halt the land acquisition process till the agitation against the three agricultural laws came to a conclusive end and owners of land should be paid compensation according to the market price.

Activists of the committee, led by state president Sukhdev Singh Dhillon, alleged that the government had continued with the acquisition process despite assurance given to owners of land already selected for the acquisition.