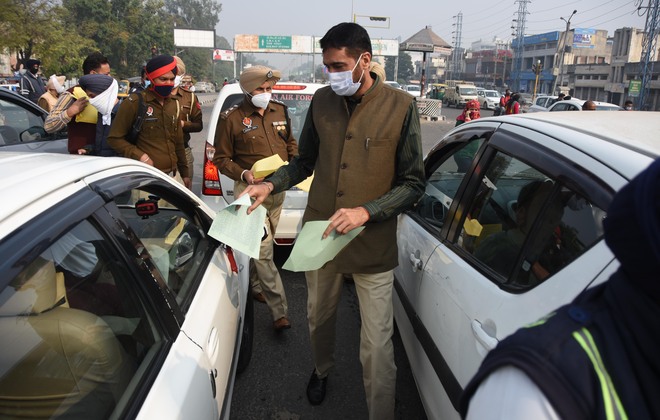 Cops distribute pamphlets among motorists during the drive in Ludhiana on Friday. Ashwani Dhiman

To prevent road accidents in the ongoing foggy days and nights, the Ludhiana traffic police launched an awareness drive in the city and distributed pamphlets to commuters in this regard.

Assistant Commissioner of Police, Traffic, Gurdev Singh, along with the cops of the traffic police, started the drive from the old city area.

ACP Gurdev said due to foggy conditions and less visibility on roads, vehicles were more prone to accidents.

The ACP said he had also started the inspection of traffic lights to ensure that all lights remained functional throughout the day.

He also urged the residents to drive cars and two-wheelers at slow speed so that the number of accidents in the foggy season could be decreased.

The traffic police will also increase the number of nakas at accident-prone spots to ensure that people do not resort to over-speeding and rash driving.