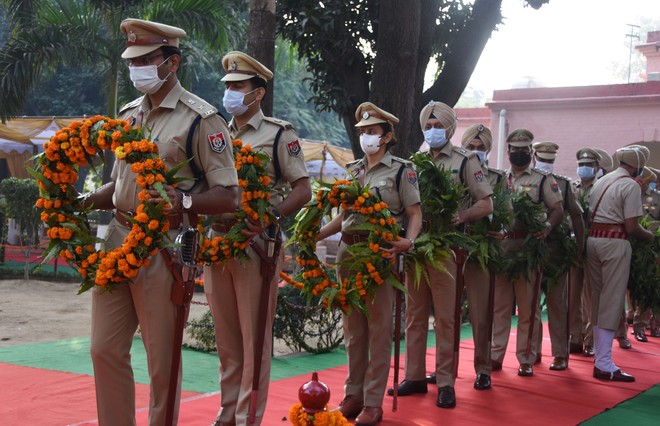 The Ludhiana Commissionerate observed the Police Commemoration Day on Wednesday. Warm tributes were paid to police and paramilitary force martyrs who have sacrificed their lives while fighting against terrorism and anti-national activities.

Ludhiana Police Commissioner Rakesh Agrawal, Joint Commissioner of Police J Elanchezhian, and other senior police officials paid floral tributes to the martyrs during the function that was organised at the Police Lines by the city police.

Agrawal also interacted with families of the police personnel who lost their lives in the line of duty.

“We are proud of brave soldiers of our Punjab Police who laid their lives at the altar of duty to save society and serve the nation. Today, we live freely because of supreme sacrifices made by hundreds of Punjab Police personnel of various ranks. We salute our warriors and pay tributes, Agrawal said.

He said the Punjab Police had set an example by eradicating terrorism and were unmatched in any corner of the world. The Punjab Police have always stood with its personnel in every odd situation and always determined for the well-being of every employee.

While narrating the historical importance of the Police Commemoration Day parade, Agrawal said it was observed by the police of all states and Paramilitary forces to pay tributes to jawans of the CRPF, who attained martyrdom on October 21, 1959, at Hot Springs (Ladakh) during an assault by the Chinese army.

He said Police Commemoration Day was observed to salute the martyrdom of all martyrs belonging to the police as well as paramilitary forces, who had sacrificed their lives for maintaining unity and integrity of the country every year.

The Police Commissioner said during the dark days of terrorism, 117 personnel of the Ludhiana police laid down their lives while combating terrorism. He assured that the Punjab Police were standing rock solid with their families, which were residing in Ludhiana. On the occasion, families of ACP Anil Kohli and ASI Jaspal Singh were also honoured.

The Khanna police also observed the day. Khanna SSP Harpreet Singh led the function and paid tributes to the martyrs. He also interacted with families of martyrs.

Police Commemoration Day was observed at the police district, Ludhiana Rural. Ludhiana (rural) SSP Charanjit Singh, police officials and martyr’s families took part in the event. Superintendent of Police (HQ) Ratan Singh Brar read the names of martyrs who sacrificed their lives during previous years. He also paid homage to all martyrs. The SSP said during the days of terrorism, 1,784 police officials sacrificed their lives for the nation while fighting against terrorists.

Of these, 42 cops belong to Ludhiana rural district.

The police personnel gave away a token of love to grieved families and assured to provide all over assistance as and when required.

In November, Pakistan transferred the management and mainten...