1st incident in scrap godown on Lohara road, the other in Haibowal 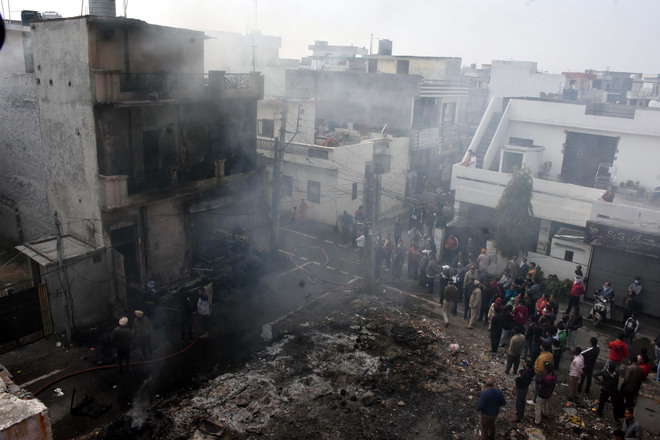 Smoke billows out of the furniture showroom that caught fire at Haibowal in Ludhiana on Sunday. Tribune Photo: Himanshu mahajan

A major fire broke out in a scrap godown on the Lohara road in Daba last night at around 10.30 pm.

Initially, the godown owner and the area residents tried to douse the flames, but due to the high intensity of the fire, they failed in their attempt.

Apart from this, a major fire broke out in the Haibowal area on Sunday.

The scrap godown on the Lohara road was situated in a thickly populated residential area and the owner had stored a huge quantity of scrap there. Sources said people tried to call the toll-free number of the fire station, but the number was not reachable. Residents then called the mobile number of a fire official and fire tenders then reached the place in half an hour.

Sub-fire officer Maninder Singh said they took more than three hours to douse the flames. He said controlling the flames was a challenge for the firemen as lanes were narrow and fire tenders could not reach outside the godown. He added that long pipes had to be used to spray water over the flames.

More than six fire tenders were used to douse the flames.

Fire officials said no fire safety arrangements were made by the godown owner due to which the fire could not be controlled at the initial stage.

Meanwhile, residents of the area said scrap godowns should be shifted out of the area so that such incident did not recur. They also alleged that a major fire incident took place last year, but the authorities didn’t take any action against the owner.

In the second fire incident at Khanna Sofa House in Ranjodh Park, Haibowal, this afternoon furniture worth lakhs was gutted and the building of the shop also suffered huge damages. The fire reportedly started from the garbage dump located near the shop as someone had set the garbage lying there on fire.