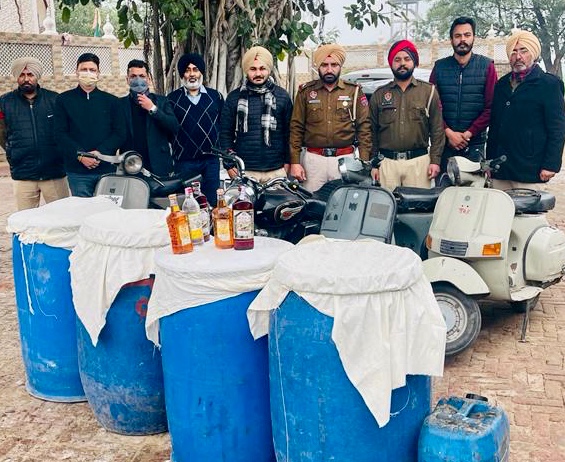 The seized stock of illicit liquor and vehicles used in the crime at the Jodhan police station. Tribune photo

The Ludhiana (Rural) police have booked seven members of a transporter’s family of Latala village, including two women, under Section 61, 78 (2) of the Punjab Excise Act for allegedly stocking illicit liquor manufactured in states other than Punjab and selling it illegally on vehicles.

As many as 920 bottles of Heer Saunfee, Fauzi Number One and Heer Saunfi brand manufactured in Haryana, five vehicles and equipment used in refilling liquor in empty bottles were seized from various places during a raid conducted on late Friday night. However, all the accused succeeded in dodging the raiding party led by the SHO, Jodhan, Bikramjit Singh, and Excise Inspector Gopal Sharma, under the cover of darkness.

Darshana Devi, head of the transporter’s family, her niece Jaswinder Kaur and sons Manpreet Singh Manna, Gagandeep Singh Gagna, Jaspreet Singh Jassi, Jagdeep Singh Jagga and Ramandeep Singh Ramna of Latala village were identified as the accused running the cartel engaged in illicit liquor smuggling. The police have yet to identify their accomplice and sympathisers, who might include political bigwigs.

The Senior Superintendent of Police, Patil Ketan Baliram, informed that cops had busted a family gang of smugglers, including women, who were involved in illicit trade of distributing liquor smuggled from other states.

Though the police had received information about smuggling of more than 1,200 bottles of illicit liquor, which were to be supplied to candidates contesting Assembly elections for alluring voters, 920 bottles of different brands were recovered during a raid conducted by the police with the help of paramilitary forces on the intervening night of Friday and Saturday.

Investigations revealed that Manpreet Singh Manna, Gagandeep Singh Gagna and Ramandeep Singh Ramna were on their way to supply different consignments when the police conducted the raid. However, the trio succeeded in escaping from the spot under the cover of darkness.

Investigations further revealed that the accused had been using common places and government premises to hide stocks of illicit liquor for months. The accused used to supply the contraband from a common place known as Pakka Darwaja in public view. Some stocks were found concealed in secret dumps in walls of residence of the accused, pits dug up at a tube well and rooms of Darwaja.

The police have yet to ascertain names of political leaders shielding the accused in the past.