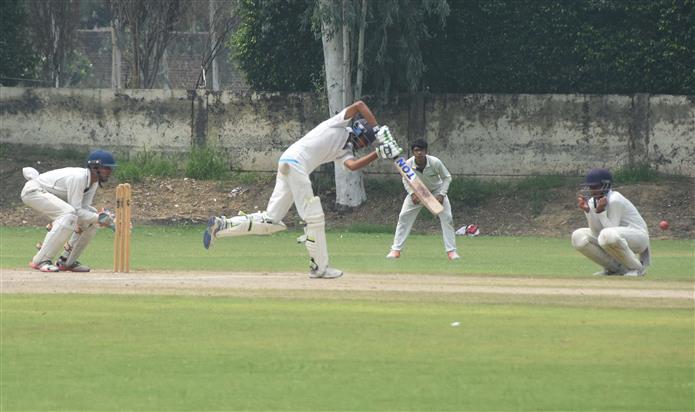 Players in action during semi-final of the Inter-District U-16 Cricket Tournament in Ludhiana on Wednesday. Ashwani Dhiman

A resolute 58-run innings by Armaan Walia and an equally useful contribution of 35 runs by skipper Shabd Tangri went in vain as Ludhiana’s first innings folded at 176 runs, conceding 43 runs lead to Amritsar on the second day of the semi-final in the ongoing Punjab State Inter-District U-16 Cricket Tournament being played at GRD Global Education Institute ground on Hambran Road here on Wednesday.

Yesterday, Amritsar, in their first innings, after some initial hiccups, had made 219 runs in which skipper Rahul Kumar played a pivot role, contributing 117 runs while Anmoljeet Singh of Ludhiana took five wickets for 51 runs. At draw of stumps, Ludhiana in reply, were eight for one in four overs.

Resuming from overnight score, hosts Ludhiana batsmen, except for Armaan and Shabd, never looked comfortable and lost wickets at regular intervals. Eventually, their essay culminated at 176 runs in 108.4 overs.

For Amritsar, Aviraj Singh was the pick of bowlers, securing five wickets after conceding only 47 runs in 36 overs and Aditya Semwal got two wickets for 23 runs while Vansh, Bhavik Malhotra and Nikhil Shoor chipped in with one wicket each.

Trailing by 43 runs, Ludhiana, in the second innings were five for one in three overs.