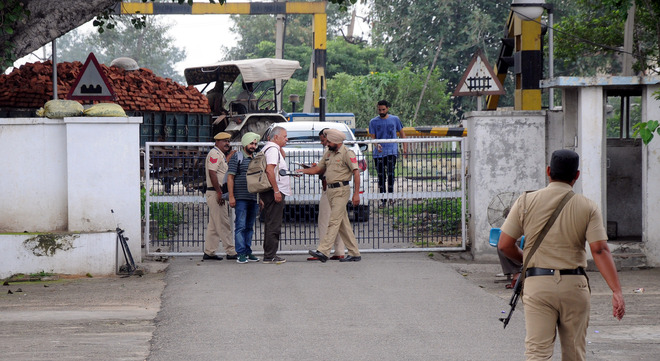 The cyber cell was trying to trace the person who made the call. Tribune photo

An unknown caller called an assistant manager of the Sahnewal airport on February 18 and informed him that four bombs have been placed in flights scheduled for departure.

Following the call, airport security staff carried out an intensive checking of planes scheduled for departure. However, nothing was recovered.

The Focal Point police station registered a case against unknown person under Sections 505, 506, 505 and 182 of the IPC late on Tuesday evening and the cyber wing of city police launched a probe in the matter.

Pawan Kumar, assistant manager, ATC, AAI Sahnewal, said on February 18, he was present at the airport when he received a call on his mobile number. The caller introduced him as Navdeep, alias Navi from Ludhiana, and informed that if he could save the airport then go ahead else everything will be blown away. The caller told him that “within 24 hours, four bombs would explode in the four scheduled flights and nobody could save passengers now.”

Focal Point SHO Davinder Sharma said the alleged caller had called from some online app and number of Navdeep of Haibowal Kalan was shown on it. On the basis of the information, a person was traced but he was found innocent.

Navdeep was in Haridwar when the accused made the call and it seemed that someone tried to implicate Navdeep in the case. Navdeep runs a provisional store in Haibowal. The police are also questioning Navdeep if he has any enmity with anyone.

The SHO said the cyber cell was trying to trace the person who made the call to the airport officer and the accused would be arrested soon.