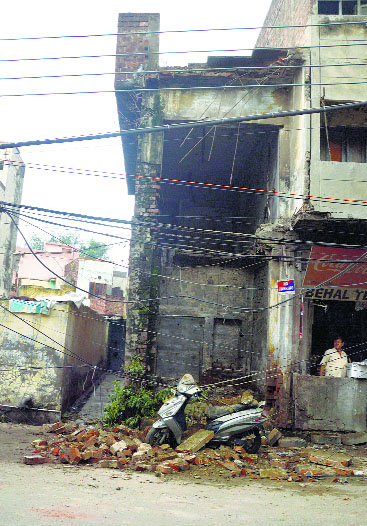 A portion of an old unsafe building that collapsed on Deepak Cinema Road in Ludhiana on Thursday. Photo: Inderjeet Verma

A portion of a building, already declared unsafe, fell on Deepak Cinema Road on Thursday. However, no one was injured. A two-wheeler parked outside the building was damaged as debris fell on it.

An MC official, Mohan Singh, said the building was declared unsafe and its owner was earlier directed to get the building vacated and then demolished. A case regarding the property is sub-judice, he said.

Several vehicles were damaged when a wall at the parking lot under the Zila Parishad at Books Market collapsed on Sunday. There are several unsafe buildings in the city.

The MC commissioner had also appealed to the city residents that if they have any information about any unsafe building in their area (except 142 identified unsafe buildings), they can inform the superintending engineers of the B&R branch, ATP, MTP or Joint Commissioner concerned so that timely steps can be taken to avert any mishap.