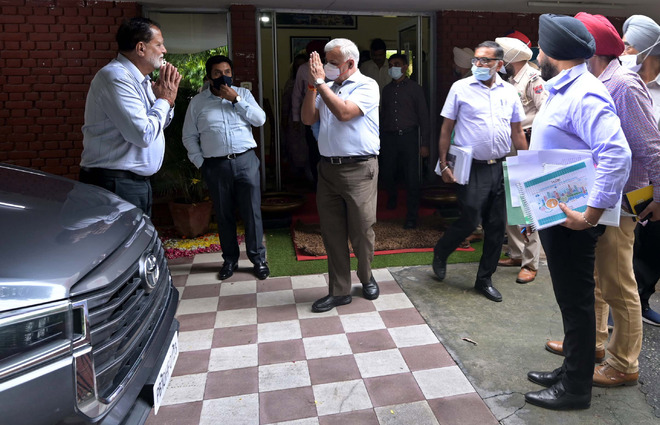 As Secretary of the Union Ministry of Housing and Urban Affairs Durga Shanker Mishra visited the city to review projects under the Smart City Mission and other Central Government schemes on Friday, members of various NGOs and BJP leaders raised questions over various undergoing projects in the city and submitted complaints to the official.

The Secretary conducted a meeting with the Principal Secretary of the Department of Local Government, Punjab, AK Sinha, MC Commissioner Pardeep Kumar Sabharwal and other officials at the PAU here and reviewed various projects.

Mishra expressed happiness that works under the Smart City Mission were underway. He said funds were available and the same were being used for the works. After March 2023, there would be no funding and the state government would have to bear the funds for the projects.

As soon as the Secretary reached the Ludhiana railway station this morning, members of a public action committee (PAC) for Mattewara Forest and Sutlej, which is supported by around 30 NGOs, gave a memorandum to him. The PAC members raised questions over the Rs 650-crore Rejuvenation of Buddha Nullah Project and sought full transparency in the ongoing project work.

Dr Amandeep Singh Bains, a member of the PAC, said: “All documents, including tender and agreement regarding the project, should be made public. The project should be run under the supervision of an eminent scientist.”

A delegation of BJP leaders, including advocate Bikram Singh Sidhu, handed over a memorandum to the official at the PAU, requesting him to order a CBI inquiry into the alleged embezzlement of funds in the Smart City Projects in Ludhiana.

He alleged: “Tenders for the projects are being allotted to a contractor that is close to a Congress party’s minister. There are irregularities in the ROB/RUB project on Pakhowal Road because tenders were allotted to a contractor with the increased amount in crores of rupees whereas another contractor was ready to complete the work at low cost. Instead of widening Malhar Road, it has been narrowed, causing problems to commuters and area residents. On the other hand, Rs15.88 crore has been spent on Retrofitting of Sarabha Nagar Market project. The amount is only spent on placing tiles that were not needed. Hence, this indicates towards corruption and matter should be probed.”

Kapil Arora of the Council of Engineers (CoE) has submitted a complaint to the Central Government official at the Animal Birth Control Centre against the alleged violation of rules in the ongoing Smart City Mission project by the authorities concerned. He said there was no proper citizen participation in projects under the Smart City Mission. He alleged that concrete and tiles were being installed around trees on Malhar Road and the Sarabha Nagar market by allegedly violating the NGT orders. In the complaint, the council also raised questions over various projects.

Ahead of the Secretary’s visit, a dog catchers’ team of the MC was seen catching stray dogs from the Sarabha Nagar area during rain this morning. The official had to visit the project site at Sarabha Nagar.

Congress leader Parminder Mehta said the Bharatiya Jananta Party (BJP) was levelling false allegations. He said: “Ahead of the Assembly elections, the BJP is looking for reclaiming lost political ground with the help of lies.”