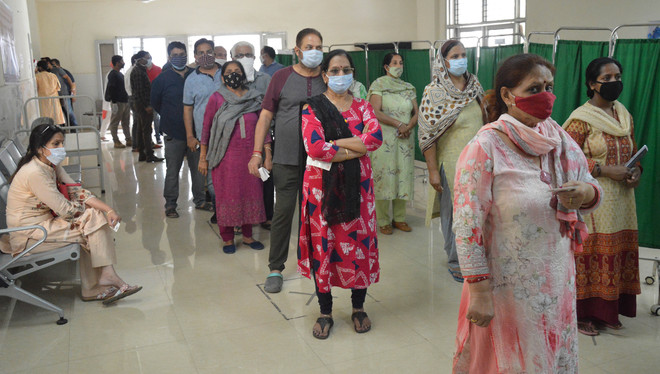 Huge rush was witnessed at vaccination sites today. With vaccination going on at government centres only, people in large numbers are coming for getting the jab. Many are in a rush to get vaccinated before the stock finishes.

People in a large number reached the Civil Surgeon’s office to get the jab. Left with no other option, doors of the hall area were closed and people were called one by one. Beneficiaries in a large number were seen outside waiting for their turn.

“Things are getting worse and Ludhiana is severely hit by the virus. I thought this is the time that one should get vaccinated. But after coming here, I saw there was a huge rush and no norms regarding social distancing were being followed and people were jostling with each other to get inside the centre,” said Preeti, a city resident who returned without getting incolculated due to a huge rush.

Another person at the site said he had been waiting for the past three hours but he was not yet vaccinated.

“Firstly, I visited a few private hospitals but since there was no stock of vaccine, I came to the Civil Surgeon’s office only to find a large number of visitors. I will be lucky if I get vaccinated today,” said Parkash, a city resident.

18-plus category waits for turn

Some states have started vaccination of 18-44 years’ category but Punjab is yet to begin the same. Many youngsters are waiting to get themselves registered for the vaccination.

“I am checking the portal every day but it always states: ‘No vaccination centre available for booking’. Hopefully, the registration is opened soon by the government,” said Harshita, an engineering student.

District Immunisation Officer Puneet Juneja said the state government would decide on the starting of vaccination for 18-plus category and no orders in this regard had been received so far.