Gang was involved in prohibited activity on Sutlej riverbed in Rahon 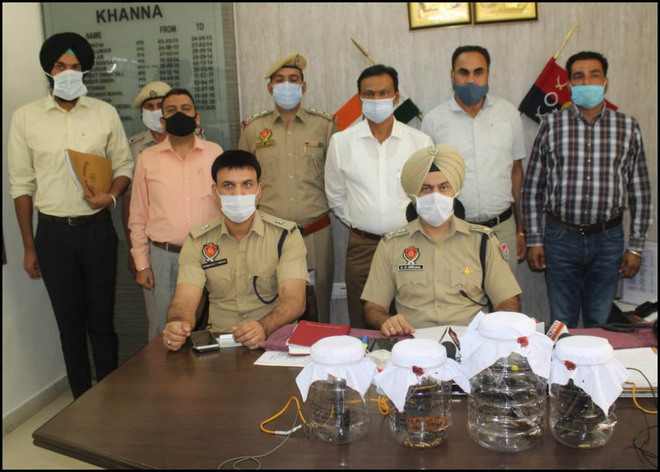 The SSP, Khanna, Gursharandeep Singh Grewal, conducted a press conference regarding the matter.

ADGP Dhoke said there was intelligence input that some criminal elements were involved in illegal mining in the Rahon area of SBS Nagar district. The input was later shared with the SSP, Khanna, to take stern action against the violators.

Gurinder was the leader of the gang involved in illegal sand mining in the Rahon area. He was a hardcore criminal and wanted in many cases of murder and robbery in Punjab and Gujarat, SSP Grewal said.

SSP Grewal revealed that in initial interrogation, Gurinder, alias Ginda, revealed that he was doing illegal mining with Raju Gujjar of Ratnana, SBS Nagar, Karanvir Singh, alias Kavi, of Samrala and others on the riverbed of the Sutlej in the Rahon area.

During his questioning, Gurinder revealed that he was wanted in a high-profile murder case in Gujarat. He along with two persons, who were running a dhaba in Gujarat, reportedly killed Ashish Maharaj with whom dhaba owners had a property dispute. In this connection, a criminal case was registered against them at the Mandvi police station in Kachchh district, Gujarat. Ginda was absconding in the murder case.

The SSP revealed that the accused had snatched an Ertiga car at gunpoint near Laddowal toll plaza, Ludhiana. He had also fired gun shots to create panic in general public near Garhshankar along with his companion gangster Gurjinder Singh Sonu. Now it came to light that he had planned to rob an NRI family of Una at gunpoint for cash, revealed the SSP.

The Khanna police are now questioning the accused for his links with other criminals in the region and with the suppliers of illegal weapons in MP and UP.