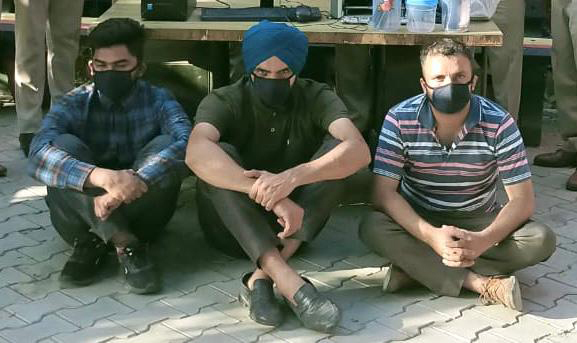 After the arrest of three engineers by staff of the Police Division No 3 on the charge of impersonating as Income Tax officials, the trio yesterday disclosed the reason for executing the fake raid.

Also read: 3 engineers held for posing as IT sleuths to loot house in Ludhiana

Dream to become rich in short span of time is what made these Sangrur-based professionals to execute I-T raid.

All the accused are engineers at KRBL basmati rice mill in Sangrur.

Accused Gurpreet Singh (28) did his mechanical engineering from Gurdas Polytechnic College, Sangrur. He was working as an assistant engineer at the rice mill. “I was earning Rs 18,000 per month salary but this amount was not sufficed to fulfil my dreams. I wanted to be a rich man but unfortunately our attempt landed us in jail. We are remorseful of what we did,” he told the police.

Another accused Prince Goyal (31), who did his mechanical engineering from Central Tool Room, Ludhiana, was also an assistant engineer at the KRBL. Earning Rs 15,000 per month, he, too, desired to have a luxurious life and become part of the team to execute the raid.

Accused Shamsher Singh (32), who is married and was a plant operator at the same mill, said, “I was earning Rs 22,000 per month. I am remorseful of what we did. What face would I show to my two kids and my wife. Instead of choosing this wrong way to become rich we should have planned to start our own business,” he said during interrogation.

All accused revealed that a few months back, I-T officials had conducted a raid on one of their colleague’s house from where they had seized Rs70 lakh. “We thought that people easily hand over money to I-T officials so we decided to try our luck. We saw Crime Patrol series, Bollywood movies and also googled ways to conduct fake I-T raid. We also made fake I-T notice in the name of hosiery owner Inderpal,” revealed the accused. The accused had also done recce of the house at Shivaji Nagar for three times.

The moment they entered the house, they all started fumbling, which led to suspicion.