Residents say they have no water even for washing hands to ward off Covid; accuse MC of ignoring their plight 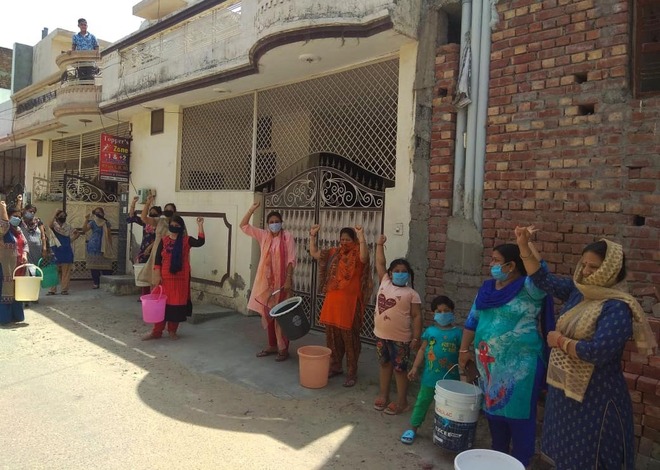 Residents of Ward No. 91 protest poor water supply in their area on Thursday. Tribune photo

There has been no water supply to areas of Ward No. 91, 29 and 31 amid the scorching heat due to defunct tubewells or other reasons. The residents of these areas have blamed the civic body authorities for ignoring their plight amid the Covid threat when maintaining hygiene is all the more important.

With temperature rising, the demand for water has increased manifold. The water supply has been badly hit in Preetam Nagar of Ward No. 91. The residents complained there had been water scarcity during the past year too but nothing had been done to solve the problem to date.

A resident of Preetam Nagar, Vikrant, said: “There has been no water supply for the past three days. However, the supply was resumed for only 30 minutes last evening. The tube-well, from which water is supplied to the area, is located far away from our colony.”

Residents said they did not have water even for drinking or washing hands which is quite important in this time of Covid pandemic. Another resident, Manish Kumar, said: “We face water scarcity during the summer every year. There is no drop of water available. We have complained to the MC and the ward councillor, but nothing has been done to resolve the problem.”

Meanwhile, residents of Ward No. 29 and 31 have complained about disruption in water supply. Councillor from Ward 31 Sonia Sharma said the residents complained about poor water supply in some colonies, including Gurmail Nagar and Gurpreet Nagar. “We had brought the matter to the notice of the MC officials concerned during the summer of 2019 too. However, no action has been taken by the Municipal Corporation,” said Sharma.

Mayor Balkar Singh Sandhu said the demand for water had increased in the city during this summer. “I have given orders to the officials concerned to ensure repair of the defunct tube-wells or motors at the earliest. I have also ordered to blacklist a contractor who has failed to replace the defunct tube-wells in the city. The water is being supplied by tankers to the affected areas.”