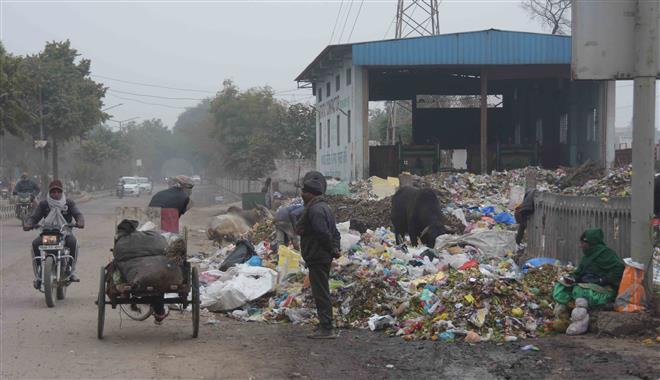 A pile of waste lies along the Dugri Road in Ludhiana. Ashwani Dhiman

Huge heaps of garbage are coming up along the road as the city’s first static waste compactor system located along the canal near the Dugri Road intersection is lying defunct. This compactor system was inaugurated just before the last Assembly elections around five years ago to resolve the problem of the uncovered garbage dump.

Residents complained that the static compactor has not been functional for the past few months. Mayor Balkar Singh Sandhu had earlier inspected the site and he had then asked officials to install new machines there. But, the MC is yet to make the compactor system functional again.

Another resident said, “It seems the waste that is dumped along the road is not even timely lifted. Big heaps of waste are welcoming the commuters. Whenever the traffic light signal turns red, many commuters stop near the dump. The situation has turned worse after the recent rainfall. If the static waste compactor is not functioning, the civic body must ensure timely lifting of the waste from the dump.”

The MC has failed to resolve the problem of several other big garbage dumps located along the road in various parts of the city. However, the Ludhiana Improvement Trust has installed static compactors at some locations. The MC had also identified a number of more sites but static compactors are yet to be installed there.