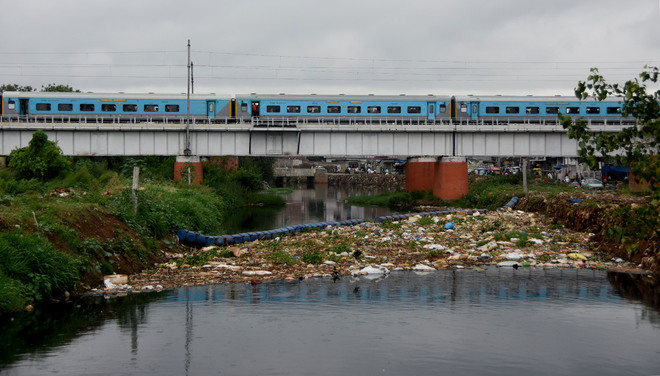 Former councillor Parminder Mehta says each year lakhs of rupees are spent to clean the Buddha Nullah but no permanent solution has been found to the problem. Tribune Photo: Himanshu mahajan

Solid waste is continuously getting collected in Buddha Nullah while the removed waste from the nullah is being kept on its banks. Notably, the Rejuvenation of Buddha Nullah Project worth Rs 650 crore is underway.

Former councillor Parminder Mehta and his aides visited the drain and raised questions over the working of the Municipal Corporation (MC). He said the waste was still getting collected in the nullah while a huge amount of waste removed from the nullah had been kept at different points of its banks.

The MC needed to strengthen both sides of the drain in a proper way. Lakhs of rupees were spent on cleaning the nullah every year but the issue had not been resolved to date, Mehta said.

Earlier, residents of the areas near New Kundan Puri Bridge had raised the matter of the MC dumping the removed waste on the banks of the nullah. A resident said, “Whenever it rains, the removed waste goes back into the drain. Moreover, there should be no garbage dump along the nullah.”

Notably, the Buddha Nullah has overflowed a number of times in the past but its banks are yet to be strengthened. Around two years ago, a portion of its banks was washed away from few points.