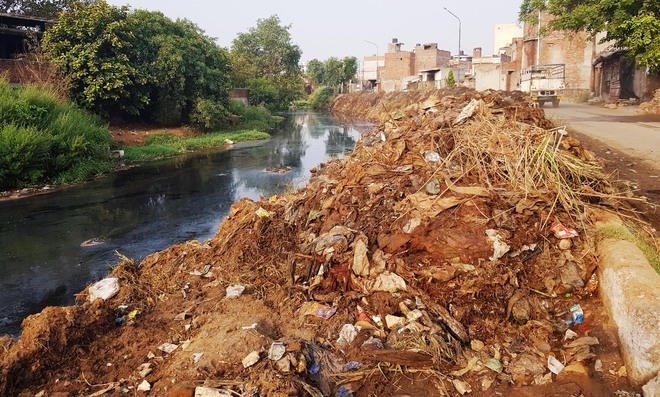 Heaps of waste removed from the Buddha Nullah lies on its banks in Ludhiana. Photo: Inderjeet Verma

Residents living near the Buddha Nullah have demanded that the Municipal Corporation (MC) must strength banks of the rivulet in a right manner before the onset of monsoon in the region.

At present, the MC has removed waste from the Buddha Nullah. The civic body has piled up waste along banks of the nullah.

Rakesh Lekhi, a resident of New Kundan Puri, said, “The MC should ensure removal of encroachments along the Buddha Nullah so that the rivulet can be cleaned properly.”

“Now, the removed waste is piled along the nullah. There are chances that this waste will flow into the nullah during heavy rainfall. The MC must ensure strengthening of the nullah banks to avoid flooding of the nearby areas,” he added.

Notably, a portion of nullah banks was damaged last year when heavy rainfall lashed the city and its polluted water entered into nearby fields. In August 2019, after sudden rise of the water level two breaches in the Buddha Nullah at different locations on Tajpur Road led to flooding of the slum area and nearby streets. Sewer water also flowed back in some areas, including Dhoka Mohala, Shivpuri and New Kundanpuri, located near the Buddha Nullah due to rise in its water level.

“The removed waste is piled up for strengthening Buddha Nullah banks. It is not the way to strengthen banks. This waste will enter nullah if heavy rainfall lashes the city. Waste removed from the nullah should be shifted to the dumping site. The MC must ensure proper cleaning of the nullah and strengthen its banks,” said Parminder Mehta, a former councillor.

The MC Superintending Engineer, Rajinder Singh, said, “Around 75 per cent desilting of the Buddha Nullah is complete. The remaining work will be completed soon. Waste removed from the nullah is transported to the dumping site. Only soil from the nullah has been dumped at some points along its banks.”

“The higher authorities have given directions to the B&R branch to place sand bags for strengthening banks of the nullah,” he added.