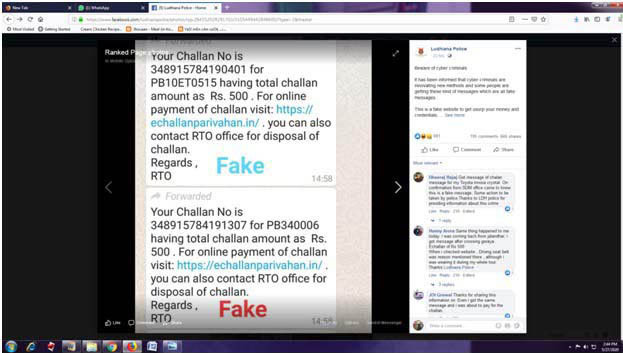 A screenshot of a fake e-challan on the Facebook page of the Ludhiana police.

While on one side Covid-19 induced lockdown has caused immense financial loss to a majority of city residents with many losing their means of livelihood on the other cyber criminals seem to have come up with yet other novel way to loot people.

Many vehicle owners have reportedly received SMS messages about e-challans of their vehicles with details of a website, which purportedly provides details of e-challan and link to online payment of penalty.

Ludhiana Police Commissionerate has cautioned city residents on its official Facebook page that these messages are fake and there is no need to take any notice of such messages. The recipients of SMS have further been warned not to visit the provided website or proceed for payment of penalty.

Surprisingly, the website created by cyber criminals has complete database of vehicles registered with the RTA (Regional Transport Authority). Once a recipient of the message enters his vehicle number, all details like make and model of the car, name of the owner, the engine and chassis number are shown on a page, which looks like a genuine web page of the RTA or the city traffic police.

In the feedback from some recipients of such SMS, it was mentioned that on inquiry from the RTA office they were told that no such e-challan was pending against them and no such message was sent by the office for the payment of penalty.

Police officials said vehicle owners had been asked to remain cautious in their own interests and not fall prey to such cyber fraudsters. The matter was also referred to the cyber crime wing to launch an investigation and trace the gang of cyber criminals from the IP address, added officials.

On data of vehicles registered with the Ludhiana RTA shown on the fake website, officials said it was available on several sites after computerisation of all record pertaining to motor vehicles. It was no big deal to hack this data for IT experts and cyber criminals, officials added.

Many vehicle owners have reportedly received SMS messages about e-challans of their vehicles with details of a website, which purportedly provides details of e-challan and link for online payment of penalty.