Waterlogging adds to woes of commuters after rain : The Tribune India 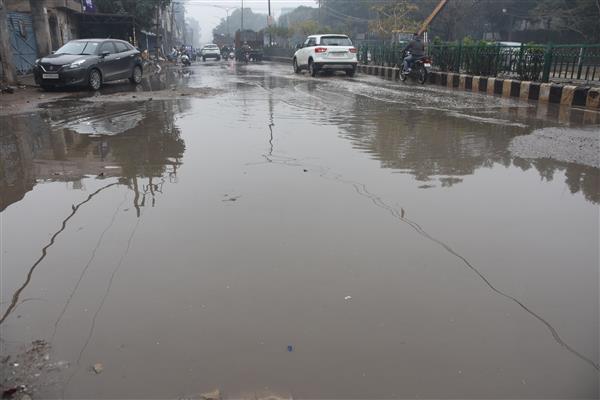 Water accumulates on a road after rain at Focal Point in Ludhiana on Thursday. Photo: Ashwani Dhiman

After rain lashed the city last night, waterlogging occurred in some parts of the city. Traffic jams were also witnessed on Chandigarh Road, leaving commuters to face inconvenience on Wednesday morning.

Rainwater accumulated on roads of Focal Point, Dhandari, Sherpur Road, Metro Road, Hambran Road, service lanes of Ferozepur Road and some other roads in the city. Later, the water got receded.

The traffic jams were witnessed at Jamalpur Chowk and Vardhman Chowk on Chandigarh Road this morning. Commuters also complained about non-functional traffic lights at both intersections. Later, police officials were also seen managing the traffic.

A commuter said: “We faced a long traffic jam at Vardhman Chowk and Jamalpur junction this morning. The authorities concerned must take necessary measures to ensure smooth flow of traffic on the stretch as such jams were witnessed in the past too.”

Weather to remain cold in next 24 hours

The Department of Climate Change and Agricultural Meteorology of the PAU, Ludhiana, recorded 16.7 mm of rainfall till today morning. The maximum temperature recorded was 17.6°C and the minimum was 13°C. The weather is expected to remain cold with the possibility of fog during morning hours.

As the rainfall started on Tuesday night, the power supply got disrupted in various parts of the city. The supply in some affected areas was restored on Wednesday morning only.