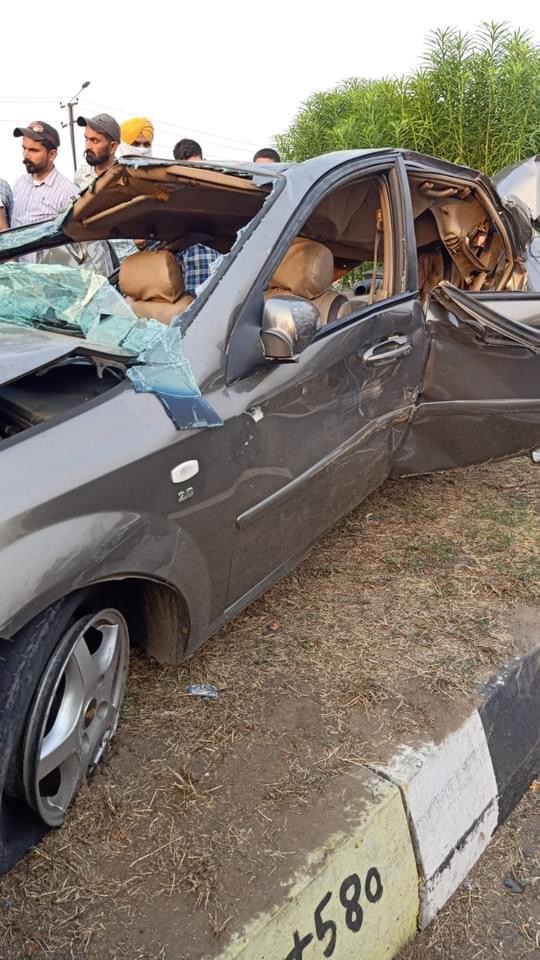 The mangled remains of their ill-fated car. tribune photos

A woman and her two children were killed when a stationary container truck, on the national highway, near Khanna, toppled over the car in which they were travelling in.

As per sources, the mishap occurred near a naka when the driver of a SUV vehicle applied sudden brakes due to which the container mounted on the truck toppled on the victims’ car.

The deceased were identified as Navpreet Kaur of Nasrali village and her twin children Harsimrat Singh and Harseerat Kaur.

Gurinder Singh and his mother Kamaljit Kaur were injured seriously in the mishap. While the ill-fated car was smashed completely, some more vehicles were also damaged.

It was learnt that a family of Nasrali village, including Gurinder Singh, his mother, wife and two children, were returning home after paying obeisance at Gurdwara Fatehgarh Sahib. While coming towards Khanna, a container truck stranded on the highway toppled over the car in which they they were travelling in, near Khanna city.

The car and the container were damaged completely. People, including passers-by, and police personnel had to deploy a earth mover to lift the container.

Though the police were yet to ascertain the exact reason behind the mishap, passers-by said it occurred due to negligence of the highway authorities.

Bodies of the deceased were shifted to the Khanna Civil Hospital for autopsy while Gurinder and Kamaljit Kaur were admitted to a private multispecialty hospital in Ludhiana.