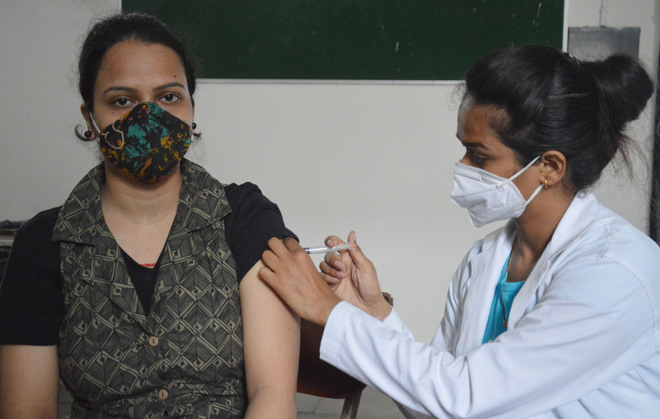 A woman gets vaccinated against Covid in Ludhiana.

Women and the persons between the age group of 30-39 were found to be most prone to the various Covid variants of concern (VoCs) in Punjab, the government has said.

Of the total 1,011 cases of VoCs confirmed in the state so far, 57.2 per cent were women, 24.5 per cent were in age between 30 and 39, 92.5 per cent were asymptomatic and 75.9 per cent patients were from urban areas, the data compiled by the Health and Family Welfare Department has revealed.

The official data from January to June till date, which is available with The Tribune, showed that a total of 2,309 samples of Covid patients were sent for whole genome sequencing (WGS), of which 1,164, which account for 50.4 per cent, were processed till date and 1,011 of them, accounting for 86.8 per cent, were found to be VoCs.

Though the UK’s Alpha variant continued to be the most dominant among all the VoCs in the state, its ratio has, however, dropped drastically from 94.5 per cent in March to 53.9 per cent in April.

The Delta variant, which originated in India, was growing fast and shot up from mere 0.6 per cent in March to 44.1 per cent in April.

The distribution of VoCs by clinical profile, as prescribed by the ICMR, showed that 92.5 per cent cases were asymptomatic, while only 7.5 per cent were symptomatic. Of the total 49 symptomatic patients, 27, which accounted for 55.1 per cent, were having mild symptoms, 21 (accounting for 42.9 per cent) moderate, and only 1 (2 per cent) was having severe symptoms.

We have been monitoring the situation very closely and have pulled out all the stops to combat the devastating second Covid wave in the state. The strict restrictions put in place have started showing desired results but we cannot afford to put our guards down till the situation returns to normal. —Hussan Lal, Principal Health Secretary