Women have a healthier liver than men: Doc 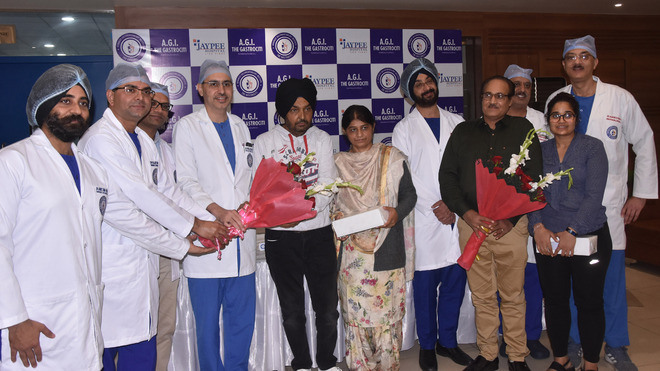 A team of doctors with recipients and donors of liver in Ludhiana. Photo: Inderjeet Verma

Liver, an essential organ that performs over 500 vital functions, is an important part of our body and needs to be taken care of. In the last decade, liver disease has become rampant in the region of Punjab due to large burden of obese and diabetic population with fatty liver, alcohol and drug abuse and high rate of HCV infection. Amid this, an observation that has come forward is that women have a healthier liver as compared to their men counterparts.

Dr Nirmaljeet Singh Malhi, gastroenterologist, AGI-The Gastrociti, which collaborated with Jaypee Hospital (Noida) and started liver transplantation services in Ludhiana in February this year said, “It has been observed that liver of women is healthier than males as they do not indulge in drinking or drugs.”

To ascertain the observation, Dr Malhi said in their hospital they had done five liver transplants in a short span of six months (barring three months deferment due to second Covid-19 wave when services were temporarily interrupted). Four of the donors were women, Dr Malhi added.

Recalling his experience, the first liver transplant patient Naresh Soni (name changed) said life had become too difficult due to repeated abdominal fluid collection and blood loss as a result of end stage liver disease. His life span was limited to a few weeks to months without liver transplant. His daughter came forward to donate a part of her liver to her ailing father despite being young and unmarried.

“Nothing was more than the life of my father and I was ready to do anything for him. I did not think about a second and decided to donate my liver and here I am with my father,” said 26-year-old Soni’s daughter.

Another three patients underwent liver transplant where in their spouses donated a part of liver for the procedure. Such successful cases and courageous donors are the need of the hour for liver patients in Punjab. “I was a habitual alcoholic which led to my liver damage and it was none other than my better half, who donated her liver and saved my life,” said another patient, who went through successful transplant at AGI-The Gastrociti.

“Some patients don’t have any eligible family donors. Since organ donation is the most generous gift known to mankind, which can create a legacy of life, the fifth transplant patient at the hospital was fortunate that he could get cadaveric liver as he was listed in cadaveric list prior. A special “Green Corridor” was created in Delhi for the procedure,” said Dr Rajiv Grover, gastroenterologist.