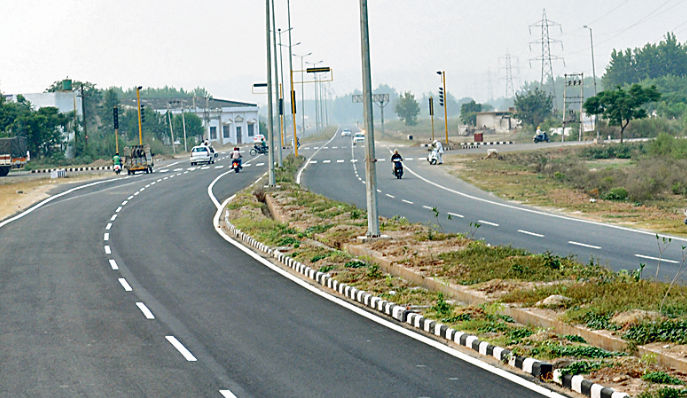 The work has begun for four and six laning of the existing Ludhiana-Ropar national highway 205K, including a spur to Kharar with Ludhiana bypass under the Bharatmala Pariyojana, the government has confirmed.

Almost 600 hectares of land across 71 villages has been acquired for the 66-km-long greenfield project, which was approved by the Ministry of Road Transport and Highways recently, a senior officer said.

I have directed the departments concerned and all the Deputy Commissioners to expedite the present pace and ensure time-bound completion of all the major infrastructure development projects in the state.

The development of economic corridors has been emphasised under the Bharatmala Pariyojana to give connectivity to economically important production and consumption centres in the country.

Sharing details, Deputy Commissioner Varinder Kumar Sharma told The Tribune, here on Tuesday that the project will cost Rs 1,607.54 crore and it will be executed in two parts under the hybrid annuity model (HAM) mode.

While the first component comprises a 37.7-km-long stretch of National Highway-205K, the remaining 28.3-km-long portion, including Ludhiana bypass, will be executed in the second part.

Under the HAM mode, 40 per cent of the project cost is provided by the government as construction support during the construction period and the balance 60 per cent is paid as annuity payments over the operations period along with interest thereon to the concessionaire.

Divulging the status of work, the ADC (General), Rahul Chaba, disclosed that the notification and the compensation award for the majority chunk of land being acquired has already been approved and issued by the competent authority.

While the award has also been distributed in almost 46 villages, the distribution is in progress in the rest of 25 villages, which will be completed within this week.

He said the final presentation with the Environmental Appraisal Committee (EAC) has been completed for seeking the project’s environmental clearance, which was awaited from the Ministry of Environment, Forests and Climate Change.

The proposal for acquisition of 7.75 hectares of forest land falling in the project site has been submitted to the Divisional Forest Officer (DFO) after conducting joint verification for getting the clearance from the Principal Chief Conservator of Forests (PCCF).

Chaba revealed that three railway overbridges to be built under the project have also been approved by the Northern Railway.

“The plan and profile of the project has been submitted and the alignment has been approved,” shared the ADC (General).