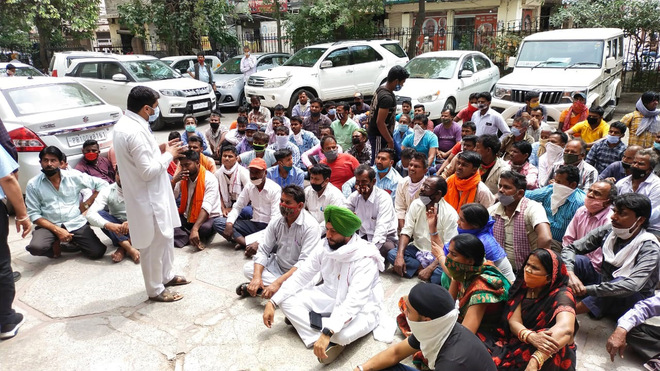 Activists of the Youth Akali Dal (YAD), led by district president Gurdeep Singh Gosha, along with ‘aggrieved’ street vendors today staged a dharna at the B-zone office of the Municipal Corporation in protest against the alleged highhandedness of the MC tehbazari staff against street vendors.

The protest was organised by former councillor Radhey Shyam and Rajesh Mishra in support of the Rehri-Farri Union.

Speaking on the occasion, Gosha said from the inception of the Congress rule in the MC and the state, street vendors were suffering. MC officials had made several promises to set up vending zones to accommodate the rehri and farriwalas but even before the promised vending zones were marked and vendors could be shifted to their allotted places, the traffic police and tehbazari staff of the MC had started harassing the vendors by confiscating their means of livelihood.

Gosha and other speakers, including leaders of the Rheri-Farri Union, alleged that certain self-styled leaders of the ruling party or cronies of other senior leaders were interfering with the process of allotment of suitable spaces to vendors in the designated vending zones being carved out in different parts of the city.

The government and the MC were constitutionally bound to safeguard the interests of the street vendors in accordance with National Street Vendors Policy, Gosha added.

The protesters also submitted a memorandum of their demands to Zonal Commissioner Neeraj Jain.