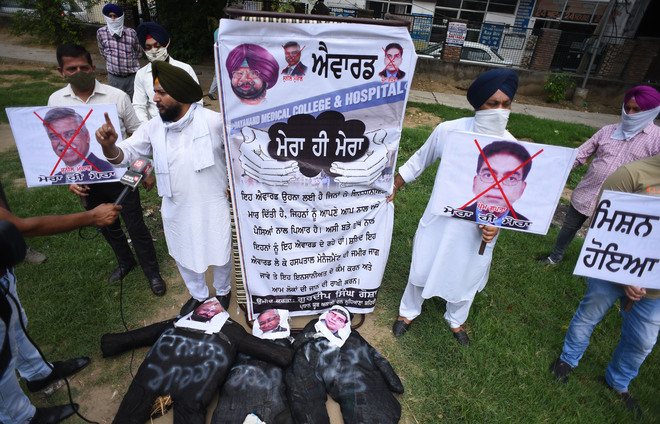 Activists of the YAD hold a protest against the DMCH in Ludhiana on Friday. Photo: Ashwani Dhiman

A team of the Youth Akali Dal (YAD), led by district president Gurdeep Singh Gosha, staged a protest outside Dayanand Medical College and Hospital (DMCH) for denying treatment to Covid-19 patients. The protesters raised slogans against Chief Minister Amarinder Singh and the DMCH management for their failure to deal with the pandemic.

Speaking at the occasion, Gosha said several Covid patients had died due to unavailability of beds and timely treatment which had exposed the claims of the state government as well as the institutions delivering medical care to the infected persons. “Much taunted Mission Fateh of the Punjab Government has been a complete failure,” he maintained.

The YAD president said while the district authorities as well as the state government had been claiming that there was no shortage of beds in the hospitals, the fact remained that patients were not getting beds and treatment in the city. The hospitals claiming to be charitable institutions were out to fleece the hapless patients while the officials and departments concerned had become mute spectators, he alleged.